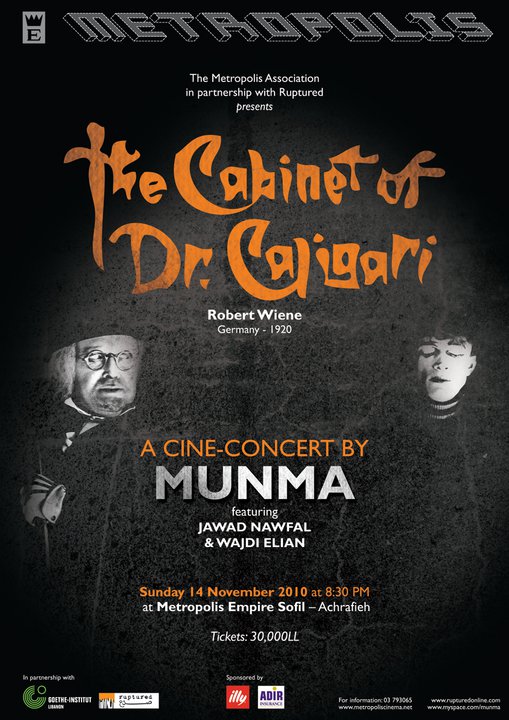 The Metropolis Association and Ruptured,
In partnership with the Goethe-Institut Beirut,

** About the Film **
The Cabinet of Dr. Caligari (Robert Wiene, 1920) is the uncontested masterpiece of German Expressionist cinema, and one of the most influential films of the silent era.

In the remote German mountain village of Holstenwall, the deranged Dr. Caligari and his faithful sleepwalking Cesare are connected to a series of unsettling murders.

** About the event **
Caligari’s Expressionist style paved the way for the dark shadows and sharp angles of the film noir urban crime dramas of the 1940s. This most celebrated of German movies is offered a new and original musical soundtrack, courtesy of Lebanese electronic band MUNMA.

** About the artist **
MUNMA was created by JAWAD NAWFAL in the aftermath of Israel’s war on Lebanon in the summer of 2006. The group explores oriental harmonies and rhythmical patterns, with a strong reliance on sampled traditional musical beds, excerpts from radio speeches and the like, and an overall somber, reflective mood.
Munma has recorded three 6-track EPs, 34 Days, Black Tuesday, and Unholy Republic, released between 2006 and 2008. The band’s latest album, Previews & Premises, was released by the Ruptured label in May 2010.

For this unique performance, Munma will be joined on keyboards by frequent collaborator WAJDI ELIAN.

This event is sponsored by Illy and Adir Insurance

Newer Post An Island in Elissa’s Name?
Older PostExhibition “The Best of Doisneau”