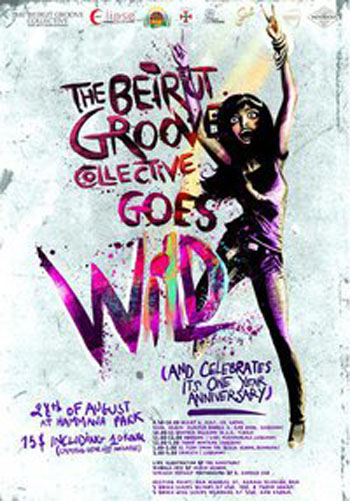 THE ONE YEAR MANIFESTO

one year
one community
one nation under the groove
…
one evening under THE BEIRUT GROOVE COLLECTIVE
so far we’ve been trying hard to give meaning to what modern music is all about… we’ve pushed our ideas and beliefs and what we thought was the right thing for us to do in a stiff society like ours. we’ve tried to redefine the meaning of urban music by treating it as a culture and not as a commercial fad.

digging deep into the crates – fighting with big cockroaches to find authentic, soulful never before heard tunes…keeping the thrill of righteous music going on and on and on …… as Duke Ellington said: “There are two kinds of music – good music and the other kind.”

so far we tried hard to stay as far as we can from the other kind….

THE BEIRUT GROOVE COLLECTIVE:
As we’ve said so many times on radio, to our friends and to everyone within earshot – The Beirut Groove Collective is a collective whose main concern is the documentation of Afro-American music which hits all sorts of modern musical ranges from jazz, blues, rhythm and blues(R&B) rock-n-roll, soul, disco, and hip-hop….. and for our kick ass dance parties, everybody knows our motto!!!!!!! —–>FUNK AIN’T NOISE POLLUTION…. FUNK FUNK FUNK AND NOTHING BUT THE FUNK……

WHY FUNK >>>>
funk is where music took on even more depth – expressing agony, social injustice, and racism with a beat that no one could deny. it’s where harsh social realities were destroyed and scattered…. it IS the right path to stop the hysterical and Savage ideology of modernity. that rare art that will literally help you—-> DANCE YOUR TROUBLES AWAY….
funk is :
“stay in school” James Brown.
“the ghetto” Bill Withers.
“everybody loves the sunshine” Roy Ayers.
“funk ain’t noise pollution….. funk is a social contribution” THE BEIRUT GROOVE COLLECTIVE
because “everybody loves the sunshine” THE BEIRUT GROOVE COLLECTIVE is at the age when one goes Wild in nature in a valley with a DESERTED LUNA/AMUSEMENT PARK… a camping site with fire camps and free shuttles for everyone………
THE B.G.C ALL-STARS line up:

The scout du liban are organising the tents and camp fire for the people who are sleeping over.