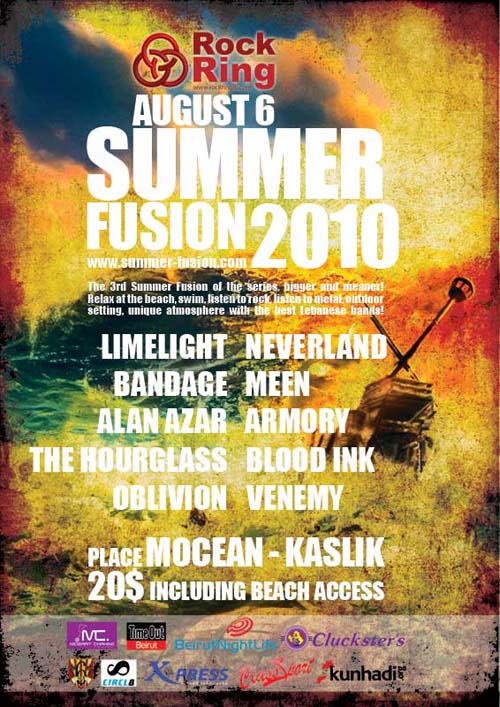 One of the biggest & most anticipated concerts of the year is back: Summer Fusion
For the 3rd time, Rockring (www.rockringlb.com) presents Summer Fusion 2010, even bigger and meaner than previous years!
Relax at the beach, swim, listen to rock, listen to metal, enjoy the outdoor setting & unique atmosphere with the best Lebanese bands!

Check the concert TRAILER VIDEO;
if you haven’t been to Summer Fusion before, check out what you’ve been missing, and check a preview of this year’s bands:
http://www.youtube.com/watch?v=ZC-KHN6uwX8

Rockring has been organizing the best and biggest local bands rock & metal events in the past 5 years, and always promises to deliver even more with bigger events and promoting more and more bands – www.rockringlb.com

Date: Friday August 6 at Mocean Kaslik, gates open at 2pm, bands start at 4:30pm
Tickets are for 20$, available at the gate.

Chicken wings competition:
We will hold a wings competition with our partner Cluckster’s,
the fastest wing eater, and for those who dare, who can beat the “911 Challenge” (911 is one VERY spicy sauce) – of course there are prizes

Local band merchandise will be sold at the event (CDs & T shirts)
Ozz Accessories will have a stand selling all types of bracelets and other similar items.
Additional merchandise & t shirts will be sold as well.

After party (sold out):
There will be an after hours barbecue with firecamp and an accoustic band to end the night. Of course this comes with a midnight swim.
it’s limited to only 50 people,
it is 10$ extra charge and includes 1 beer & 1 bbq sandwich

A band covering the best of Michael Jackson to get things started.
These guys cover the songs like no other has!
www.summer-fusion.com/neverland

A relatively new band, but these guy sure know how to get the crowd going. Playing only originals, these guys are doing it right.
www.summer-fusion.com/limelight

Those who don’t know this band, well, where have you been?
Covering the best rock hits of the last 2 decades all the way from Bon Jovi to Dio.
www.summer-fusion.com/bandage

The renowned guitar virtuoso Alan Azar is back with his band to deliver some of the best original progressive tunes.
Already one album released and has been a big hit, the second is on its way, sample some of the new stuff!
www.summer-fusion.com/alanazar

With their last concert in 2004, one of the best bands to have been formed in Lebanon being Formed from members of “OATH TO VANQUISH”, these guys will deliver a blast from the past of the best covers for Iron Maiden, Megadeth, Metallica, Slayer, Pantera, and others. A band not to miss, for this opportunity comes rare!
www.summer-fusion.com/armory

One of the oldest still active metal bands in Lebanon, about to release their second album. These guys are known for their heavy downtight beats & performance. They will deliver some pumping thrashcore to get things moving.
www.summer-fusion.com/bloodink

A Syrian heavy metal band in their first ever big appearance in Lebanon.
Not to forget to mention that their frontman vocalist is no other than Bassem Deaibess from Blaakyum!
These guys have already released 3 albums, and will play some kickass originals, as well as some covers such as Judas Priest, Dio, & others.
www.summer-fusion.com/thehourglass

A band that has worked hard to get a long way since they started. They have already recorded their first demo CD; this band will give you old school metal, covers and originals, as well as a very dynamic stage presence !
www.summer-fusion.com/oblivion

This band goes out to all coreheads and breakdown freaks! These guys not only are good at what they play, but they have a unique sound !
www.summer-fusion.com/venemy