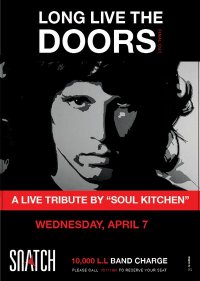 Soul Kitchen are back at Snatch on April 7th!

Soul Kitchen brought back the eternal music of the Doors last Thursday night. With Jad Haddad on drums, Pascal Sarkis on bass, Raja Nawfal on keys, Wassim Bou Malham on guitar and vocals, Snatch was bustling with the band’s friends and fans. Even Star Scene’s crew had turned up for the occasion.

‘Soul Kitchen’, the song that started it all was naturally part of the group’s set, but so were ‘Light my Fire’, ‘Break on Through’, ‘People are Strange’, ‘Whisky Bar’, ‘Roadhouse Blues’, ‘Riders on the Storm’ and many others. The band played all the classic hits of course, as well as some of the songs we’re not as familiar with.

At one point, Wassim smiled into the mike before saying, ‘Hello I Love You’. He then went on to perform the song by the same name. Later on, after getting a mostly female response to whether or not there were any back door men in the room, the man who doesn’t miss a beat jokingly remarked that there seemed to be more back door ladies in the crowd that night.

As a whole, a real good time was had by all. I for one was glad to be there because the band managed to turn my bad mood around.

When asked if the promising quartet had the intention of composing its own original material, Wassim replied that Soul Kitchen was definitely cooking something up.