SLUTTERHOUSE in concert at the Basement 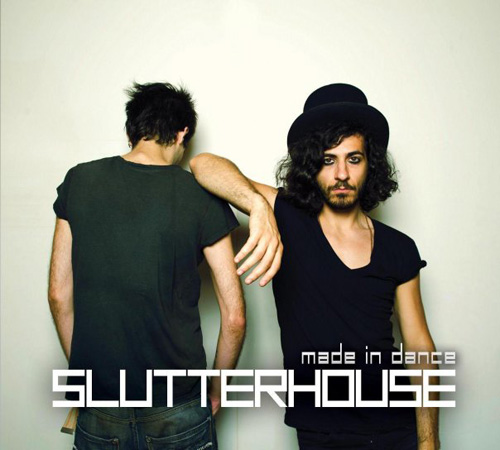 One year after the launch of their debut album at the Basement, SLUTTERHOUSE return to Beirut for an exclusive concert, their first in Lebanon in 2010!

“[…] one of the finest electro-pop albums this critic has heard since Gary Numan first donned eye shadow.” – Time Out Magazine

“[…]More importantly, perhaps, they can’t ever sound like anything else because there’s little chance a band has ever been formed by such polar opposites. There was no studious design to this sound and, unlike the vast majority of new bands, certainly no conscious imitation of a shared musical obsession. In fact, Slutterhouse is the sound of LA cock-rock and knob-twiddling techno meeting in a head-on collision that leaves only two survivors – who then bond over the rhythmic bleeps of their respective life-support cardiographs.[…]” – Eddie Taylor, NOX Magazine, August 2009.

Slutterhouse could be described as an outlandish crossover between underground electronica, mainstream club music, and rock n’ roll. Most importantly though, Slutterhouse’s sound is the result of an alliance/tension between two very different personalities: Rabih Mick Salloum and Nabil Saliba.

Originally from Beirut and based in Paris, Slutterhouse released their debut album Made in Dance in the Middle East last fall; it was described by Time Out Magazine as “one of the finest electro-pop albums this critic has heard since Gary Numan first donned eye-shadow.” Slutterhouse’s debut record received both critical and public acclaim, while the band was featured in prestigious magazines such as ELLE and The Daily Star, and made the cover of the February 2010 issue of Lifestyle Magazine.

After touring clubs in the Middle East and sharing the stage with bands like Dan Black, We Have Band, and Super Furry Animals at the Dubai Sound City festival, Slutterhouse is now releasing their debut single EP Inside the Station remix EP (“Adrenaline-pumping track” – Skin Magazine) in all digital stores worldwide (April 15th). The international buzz has already got going and the band has kicked spring off with gigs in London and the major Liverpool Sound City festival in May. Slutterhouse has also been selected as Artist of the Week on numerous blogs such as Indie Music Universe, I Am Entertainment, and NRG Theory Management.