Meet and Greet Shaggy at Beiruf 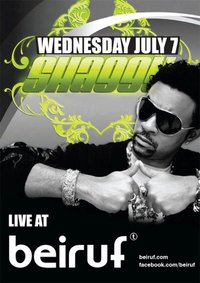 Some people just love a challenge. Grammy-winning reggae/pop superstar Shaggy is one of those people. Like the time he hit #1 around the world with his first major label single (“Oh Carolina”), or the time he walked unnoticed through a crowded arena before a concert, then required an escort on the way out because of the mob of newly-won fans. Shaggy’s favorite challenge, however, is one he poses to himself every time he enters the studio and draws on his limitless hit-making talent. That experience must have become routine for Shaggy while creating his new MCA album Hot Shot. In its thirteen tracks, Hot Shot proves Shaggy remains a master of many styles – from reggae and dancehall to pop/R&B – making it a happy hunting ground for every kind of music fan.

“This album is a roller coaster ride,” says Shaggy of Hot Shot, which instantly qualifies as one of the most upbeat and sexy party records of the year. “I wanted to show many different sides of my musical personality.” To pull that off, Shaggy enlisted the help of co-producers Jimmy Jam & Terry Lewis, Robert Livingston, Shaun “Sting” Pizzonia, Dave Kelly, Tony Kelly and Gordon Duke. Recorded at Shaggy’s New York studios and in Jamaica as well, the new album was entirely written or co-written by Shaggy himself, and of course features his distinctive, utterly unique vocals throughout.

For fans accustomed to Shaggy’s well-known party vibe, some of the sentiments on Hot Shot might come as a surprise. “Hope” (featured in the Kevin Costner film “For The Love Of The Game”) is a stirring, autobiographical portrait of the artist as a young man. “The song is a little out of character for me,” says Shaggy. “It’s a little deeper and more sensitive.” The album also includes “Luv Me, Luv Me,” Shaggy’s hit duet with Janet Jackson, produced by Jimmy Jam and Terry Lewis for the soundtrack to How Stella Got Her Groove Back. The great Minneapolis-based production team also produced the songs “Lonely Lover” and “Dance and Shout.” Other tracks such as the “Freaky Girl” and “Wasn’t Me” seamlessly blend Shaggy’s Jamaican and U.S. roots, while Hot Shot and Not Fair exemplify his bad boy reputation. “I’m a tongue-in-cheek writer,” he says. “I want my songs to tell a story, to be fun and funny at the same time.”