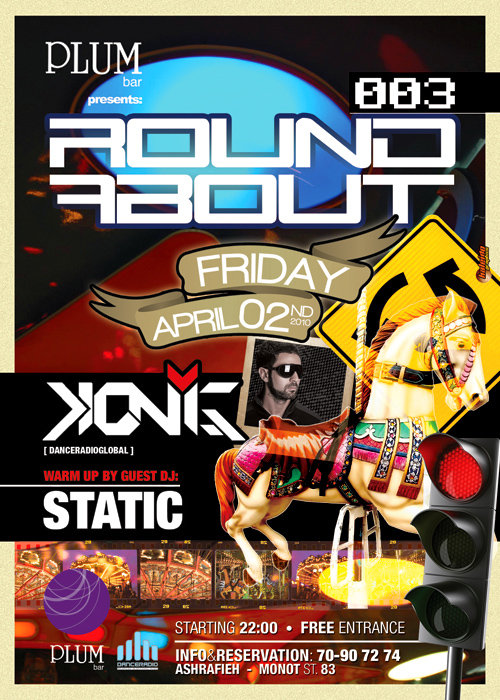 < On Friday April 2nd , Plumbar proudly presents “ROUNDABOUT” 003 >
featuring :
Main Dj:
———-
– KONIG (DanceradioGlobal)
<< BIO >>
Born in Montreal and residing now in Lebanon, a business major by day and an accomplished musician, dj and producer by night Eddy Bitar a.k.a ‘ Konig’, started developing an interest to music through his uncle at the mere age of 10. Through playing and listening to drum and bass; the electric drums. He discovered his love for electronic music, sinking deeper and deeper into world of electronic music. Konig was inspired by all Trance genres from Progressive , Electro,Uplifting all The way to tech trance!
Konig got his first decks in 2006 and found himself spending all his time on them; practicing, and not differentiating night from day. Over the next few years his musical taste evolved into a passion for playing for the crowds attempting to convey what he was feeling when suddenly he found himself wanting to take music to a new level that was production by pursuing the study at the S.A.E Institute where he got his certificates in Electronic music production.
As A DJ, Konig has performed in various clubs, Venues & Beach resorts, playing alongside international artists & DJs including :
|MARCO V, RICHARD DURAND, DANIEL WANROOY, FRED BAKER, GREG NASH , CLIFF COENRAAD & MAX GRAHAM|
At the end of 2008, a producer in the making, he started devoting all his time to developing his creativity, acquiring a new taste for Tech Trance Sounds and producing 2 tracks, due to be released in the coming year.
KONIG’s willingness & devotion continue to project to the future with numerous releases & performances around the world as well as a one of a kind radio show ” THE VERDICT ” to be aired on one of the world’s most respected, sought after and most listen to radio station: ” Dance Radio Greece ” every fourth Thursday Of The Month – 12 am ~ 1 am [Beirut Time] – 23:00 ~ 24:00 CET
&
Guest Dj :
————
– STATIC
Door Opens @ 10:00 pm
<< Free Entrance >>
For info & Reservation : 70-90 72 74