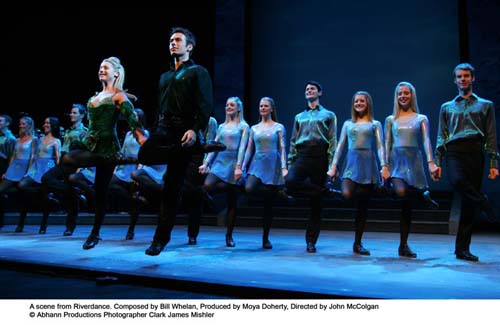 Appearing for the first time in the Middle East, Riverdance is the world’s biggest Irish dance production. Since its creation in 1994, the show has been seen by over 22 million people.
For 5 consecutive nights, 40 dancers and live musicians will deliver the ultimate family entertainment show. 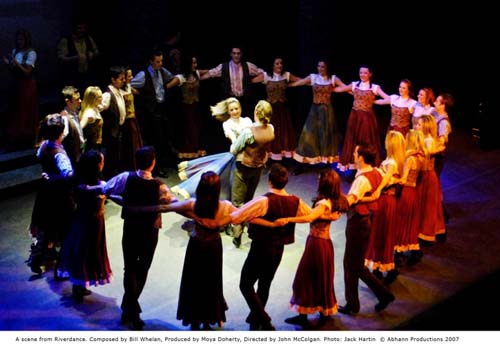 BIOGRAPHY
Of all the performances to emerge from Ireland – in rock, music, theatre and film – nothing has carried the energy, the sensuality and the spectacle of Riverdance.
Born in Paris in 1964 to John and Heather Cook and raised in the region in southern France known as the Camargue, Jesse Cook grew up with the sounds and influences of Gypsy music.
With its fusion of Irish and International music and dance, the show broke all box office records during its world première run in Dublin in early 1995. When the show transferred to London in June of that year, the reaction was unprecedented, with the original 10 performances being increased to 151 in subsequent months. There followed a hugely successful tour to New York, Belfast and Cork. Since then, it has packed theatres throughout North America, Oceania, Asia and Europe.
With music and lyrics by Bill Whelan, produced by Moya Doherty and directed by John McColgan, Riverdance is the development of an original idea by Moya Doherty, which was initially performed at the Eurovision Song Contest held in Dublin in April 1994 as a seven-minute interval act.
It is an innovative and exciting blend of dance, music and song. Drawing on Irish traditions, the combined talents of the performers propel Irish dancing and music into the present day, capturing the imagination of audiences across all ages and cultures.
The company consists of 60 cast and crew members, with the remarkable Riverdance Irish Dance Troupe, the cream of Irish musicians in the Riverdance Band and a spectacular array of talent from Spain, Russia and America, performing to the magic of Bill Whelan’s music.
The wave of public enthusiasm is not only reflected by show attendances but by massive commercial success as demonstrated in phenomenal sales of the DVD, video and CD. 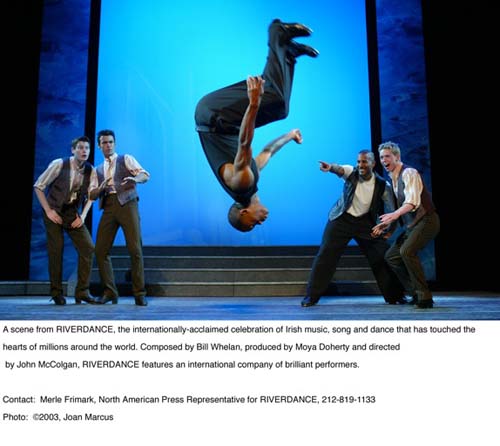 What does Riverdance mean?
The theme of the 1994 Eurovision was ‘The River’, as produced by Moya Doherty. Bill Whelan took this theme as a starting point when composing music for that seminal interval act.
Riverdance traces the life of a river.
The invocation sung at the start is called Cloudsong: it is the rain falling, feeding the river, which springs to life and flows through the land and out to sea. There, the cloud reforms and returns to the land, nourishing, renewing and refreshing it. The constant refrain ‘uisce beatha’ translates as ‘water of life’. The number builds from the gentle song to the dancers’ feet rhythmically recalling a river gathering force and rushing to the sea.
The choreography reflects this cycle. The riverwoman dances alone, her soft-shoe dance evoking the flow of the river. As she crosses the land, the earth, represented by the male dancer, awakens and bursts forth onto the stage. As the strength of the river builds, so dancers gather, signifying new life and energy, until the full Riverdance line swells to fill the stage as the river meets the sea. Then earth and river dance in harmony, as the water of life renews the land.
The river, from cloud to sea to cloud again, symbolises the life cycle, and echoes the Irish experience of emigration and renewal: people who had left their homeland and travelled across the sea, returned in the 1990s to enrich Ireland with their talents and experience gained abroad.
The show as a whole builds on this idea, also exploring the way people from different lands enrich the countries they emigrate to, bringing with them their own culture, music and dance.

The Facts
Since Riverdance began performances in Dublin 1995, the show has…
Played 10,000 performances
Been seen live by over 22 million people in over 350 venues worldwide, throughout 40 countries across 4 continents
Travelled 600,000 miles (or to the moon and back!)
Played to a global television audience of 2 billion people
Sold over 3 million copies of the Grammy Award-winning CD
Sold 10 million Riverdance videos