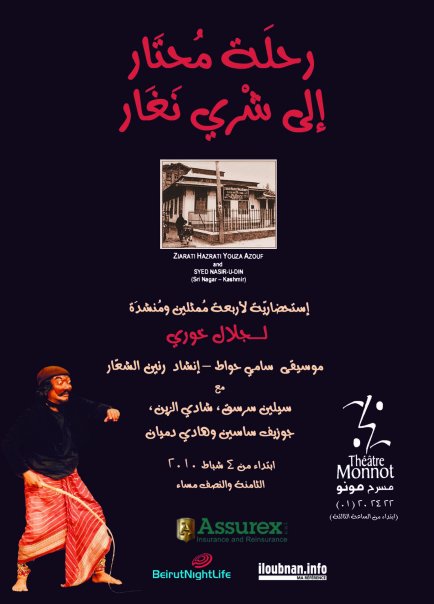 […] There is this tomb where lies a venerable man… A man whose identity is still dividing researchers from all over the world.
To get things clear, a man, full of doubts, decides to visit this site by himself and travels very far, over land and sea..

Hence, starts a journey that will carry him to a new world where reflexion blends in with comic situations, dance, live original music and live singing.

A scenic evocation where the man challenges many of his beliefs as the Lebanese Theater meets the Far East with all its marvels and mysteries.

Original Music composed by Sami Hawat,
and played every night by a quartet of musicians,
with a chanting interpretation by Ranine El Chaar.

Special people have showed their interest in the presentation. Among them,
Assurex,
marcomlux.com,
iloubnan.info
P.S: This is NOT a commercial play; it is neither spiritual, nor mystical.

The Writer – Director: JALAL KHOURY started his career as a comedian in 1962 in the frame of the francophone college theater. Then, as a director, he became the promoter of the political theatre of the 1960-1970. In 1973, he was elected President of the Permanent Committee of the Third-World of the International Theater Institute (annex of the Unesco) and stayed in his position until 1977. Since, in parallel to his artistic activities, he has been teaching at the « Institut d’études scéniques, audiovisuelles et cinématographiques » (Iesav), at the Université Saint-Joseph. His written works have been translated and played in several languages. Among them: Weizmano, Ben Gori and Co (1968), Geha in the Border Villages (1971), Al-Rafic Segean (1974), Kazzab! (1983), Fakhamat Al-Ra’is (1988), Rizcalla ya Bayrut… (1996), Hindiyeh, the God Lover (2003), Al Tariq ila Qana (2006), Rihlat Mouhtar ila Sri Nagar (2009).