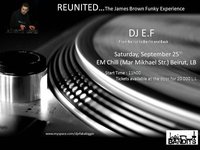 Lebanese extraordinaire, living in Berlin for more then 10 years, DJ E.F. is going to spin a live extended set in his hometown Beirut.

Join us to enjoy a master of da spin

DJ EF BIO:
…
I have been living in Berlin since 2001. I’m a mechanical engineer; I have graduated from the TU Berlin.

I started djing when I moved to Germany. That’s when I began digging deeper into Black music specially rap music, so I begun buying records and spinning at some student parties. My record collection was constantly growing and I kept on improving my technical skills till the day when I met a DJ who gave me the opportunity to play with him at a club in Berlin as a guest DJ. I did well that night and so I begun to play with him at some other clubs in Berlin and make some connections in the city. After meeting some friends who used to scratch and beat juggle, I begun to practice scratching and focus on it by watching and learning from a DVD called “do it yourself part 1” (made by DJ QBert). This step changed a lot of things in my life; it helped me move to higher levels and get a taste of professionalism.

I did few mix tapes which helped me grow in the nightlife scene and establish more connections.

2004-till present: Resident DJ at Sophienclub, Palais and the MBIA Club in Berlin.

I recently scratched on tracks by Iron Curtain, Beirut Bandits present Change, Goliath and many others. Currently at work to mix a Beirut Bandits’ compilation.