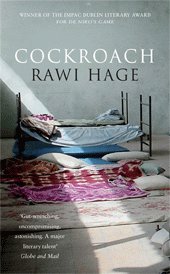 Rawi Hage (born 1964) is a Canadian writer and photographer.

Born in Beirut, Hage grew up in Lebanon and Cyprus. He moved to New York City in 1982, and after studying at the New York Institute of Photography, and relocated to Montreal in 1991, where he studied arts at Dawson College and Concordia University. He subsequently began exhibiting as a photographer, and has had works acquired by the Canadian Museum of Civilization in Canada’s capital. In addition to his work as a writer and a visual artist, Hage also spent time as a cab driver in Montreal.

His debut novel, De Niro’s Game (2006), won the 2008 IMPAC Dublin Literary Award,[1] the most lucrative literary prize in the world for a single novel.

Commenting on their selection, the IMPAC judges remarked on “its originality, its power, its lyricism, as well as its humane appeal all mark De Niro’s Game as the work of a major literary talent and make Rawi Hage a truly deserving winner.

His second novel, Cockroach, was published in 2008 and was also a shortlisted nominee for the Giller Prize and the Governor General’s Award, as well as being the winner of the Paragraphe Hugh MacLennan Prize, awarded by the Quebec Writers’ Federation.