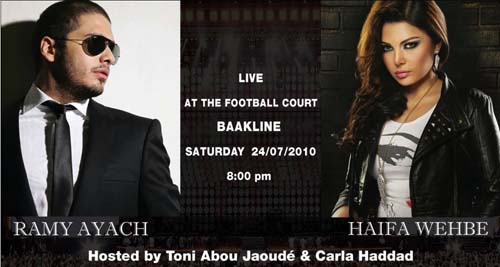 The event will be hosted by Toni Abou Jaoudé & Carla Haddad

Pop star Ramy Ayach ended recently his contract with Rotana company to join Melody. He had met with the company’s CEO Jamal Marwan and he was satisfied with the package he offered to him. Ramy will sign the contract in two weeks. Will Melody take care of Ramy more than Rotana did?

Haifa Wehbe was born in Mahrouna, a small Shia farming town in Southern Lebanon. She grew up listening to jazz and R&B. She began to work as a model at a young age and won the title of miss south Lebanon at the age of sixteen.[1] Wehbe won an ancillary title at the Miss Lebanon competition, which she had to relinquish when it was discovered that she had already been married (at age 18) and had a baby girl called Zeineb, disqualifying her. She also made a name for herself when she starred in a music video clip for the singer George Wassouf. By 1996, she had appeared on over a hundred magazine covers. Wehbe is married to Ahmed Abu Hashima and is currently living in Egypt with him