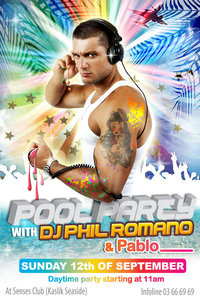 Join us on Sunday the 12th of September at the outdoor pool of Senses Club, Kaslik seaside, as we bring you one of the fastest rising house music DJs.

Sun, great venue, cocktails, sexy crowd and a crazy DJ that will keep your head spinning all day long. DJ Phil Romano will be spinning at Senses club for a pool party with a different stamp.

PHIL ROMANO, one of the most sought after DJs in the happy house/tribal house music industry…. He played as a guest DJ in many major festivals: BARCELONA, IBIZA, LONDON, PARIS, NYC, RIO DE JANEIRO, SAO PAULO, MADRID, TORONTO, MONTREAL and many more.

PABLO is a Lebanese DJ born in Beirut, given the gift of rhythm and beats,
He started playing Dance Music in 94 at Cheyenne Bar in Brummana, then moved on to Down Town Beirut in 97, while spicing up some hit places in the capital

His career in the world kicked off where he played in several After Parties along with DJs G! & Special_ Kase. Where he shook his crowd for a year with the most up-beating Tech-progressive music
He also played with international DJs such as Pablo Ceballios, Ignazzio Belgium, Tania Von pear, Beebee, Asaad Rizvy , Big Al, Ali Ajami, Frederick Stoned etc…

The crowd heard him felt him and they all became followers…
In the massive winter 07 Pablo____ started spinning more crazy Afterhours parties in town! & Afterhours sets following big events
In the summer of that same year Pablo____ hooks up with one of the best electronic clubs in the city, and still performs there every once in a while!!
Pablo____ has recently played in the well known international yearly dance festival DISTANT HEAT with Armin Van Buren in Wadi Rum – Jordan.

“Music is what feelings sound like”….Keep those feelings growing. PABLO____

Organized by AMPM & VIVIAN SHALLOP in collaboration with Senses Club.
This event is 21 years and over. Tickets are non-refundable. We reserve the right to admission.