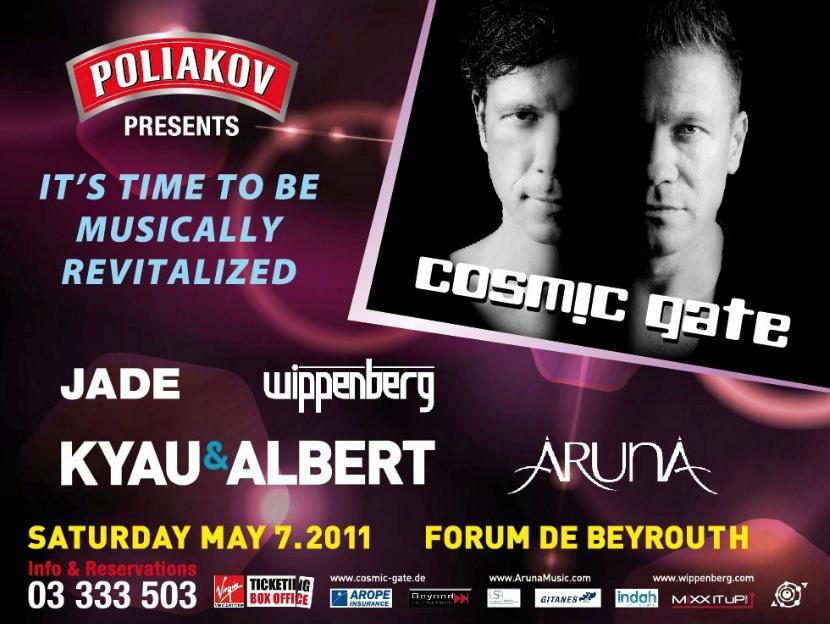 Details: On Saturday May 7, it’s time to be musically REVITALIZED Again!

With the Most Anticipated & Awaited DJs: COSMIC GATE

In an Unprecedented Line-up to include as well: Jade Wippenberg and Superstar DJs: KYAU and ALBERT

+ Special Appearance by The beautiful Singer with the Angelic Voice who will keep you Under Her Spell: ARUNA

Over 10 boundary-pushing years, Nic Chagall and Bossi have evolved Cosmic Gate into one of the most creative and highly-sought-after electronic music acts in the world.

Four hugely-received albums have transported tracks like ‘Not Enough Time’, ‘Body of Conflict’, ‘Analog Feel’, ‘F.A.V.’ and classics including ‘Exploration of Space’ and Fire Wire onto a now uncountable number of dance floors.

As DJs, the effortless cool of their kinetic, enthralling live sets are seen by hundreds of thousands of club and festival goers annually. It’s this perfect storm of production and spinning power that saw them become the highest-climbers in DJ Mag’s 2009 Top 100 chart and land at no. 24 in 2010.

In early 2010 Atlantic Records US approached them to remix James Horner’s ‘I See You’ – the main theme from the film Avatar. This run culminated in them being nominated for Best Remixer at the 2010 IDMAs.

One of the biggest rising stars in the Electronic Dance Music scene, and creator of the club hits “Chakalaka” and “Pong”!

Genre-warping electronic music adventurer Wippenberg (a.k.a. Olaf Dieckmann) has been supplying the world’s dance floors with audio titans for close to 15 years.

He’s championed as much by Eric Prydz, Angelo, Ingrosso & Axwell (also known as the Swedish House Mafia), as he is by Tiësto, Armin Van Buuren and David Guetta.

This casts Wippenberg as one of, if not, the most diverse DJ/producer in today’s EDM universe.

Ralph Kyau and Steven Moebius Albert are known to the electronic dance music world as Kyau & Albert, one of the most original DJ/Producer duos on the dance music circuit.

The two Germans have produced a collection of massive club hits including ‘Made Of Sun’, ‘Velvet Morning’, ‘Walk Down’, ‘Kiksu’, ‘Are You Fine?’, ‘Hide & Seek’, ‘Megashira’, ‘I Love You’ and ‘Once In A Life’.

Their outstanding collaboration with Above & Beyond, ‘Anphonic’, was released in the summer of 2010 followed by the hit single ‘Painkillers’ with their new single “Barbizon” K&A started into 2011.

Renowned for their exceptional remixing abilities, Kyau & Albert have remixed the tunes of some of the most influential names in clubland including: Faithless featuring Dido, Paul van Dyk, Bent, Armin Van Buuren, Kosheen & Cosmic Gate.

The duo deliver explosive, cutting edge DJ sets and their energy behind the decks is simply infectious. Catching them live is an experience you won’t soon forget! Kyau & Albert are listed for the 3rd year now in the Top40 of the DJ MAG list.

Guided by a compass of seemingly magnetic emotion, songwriter/artist Aruna travels a deeply personal path of art and music marked by impeccable song craft, a burnished voice and an accomplished musicality.

It was only relatively recently that she was drafted into dance music, being invited in 2007 to partner with The Thrillseekers as vocalist and co writer on the ubiquitous, critically acclaimed single ‘Waiting Here For You’.

She has since shifted her focus primarily towards electronic music, becoming one of the genre’s most sought-after singers, and amassing an ever-growing string of chart topping releases with such high profile DJ/producers as:

She continues to tour around the globe, singing to sold-out crowds from Cairo to Saigon and is currently In the beginning stages of work on her own solo album.

In collaboration with: ► Kristie’s Agency(www.kristiesagency.com).