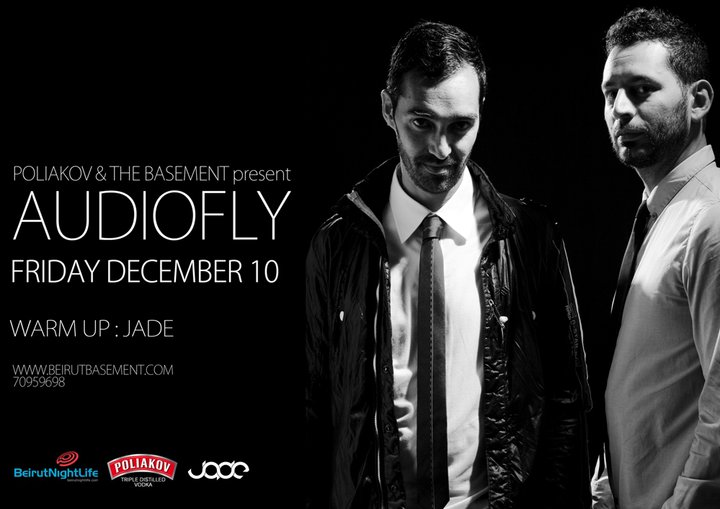 Audiofly are a DJ/producer duo, Luca Saporito and Anthony Middleton. They met and started working together in the spring of 2002 and immediately started a prolific partnership based on their shared music styles and experiences on the DJ circuit. Their combined talents have created a powerful, experimental and original style of music,(a deadly, dirty, jackin, tech meets electronic House) which is very current on the underground club scene. Alongside their Audiofly moniker the boys have started a new project entitled Audiofly X which covers the deeper and more minimal spectrum of house music. Their first Ep called Stolen Goods was signed to SAW recordings and features on the Satoshis 3D comp. The next one out will be released on Moodmusic at the beginning of November .The next X release after that, the 4Play EP will be out on Get Physical later this year.

COLLABORATIONS Collaborations are a way of bringing out different aspects of our musical tastes, through working with others we are inspired to move in new and interesting directions. Current Projects include:-Sleeper Thief A collab with Dj Miss Jools which is getting aclaim from DJs such as Dominic Eulberg, Ali Schwarz (Tiefschwarz), Jamie Jones, Funk DVoid, Damian Lazarus and Agoria, to name a few. The first EP Freefall (64 records) was featured in IDJ and was the Update magazines essential Techno tune (Feb2006).Rekleiner Is Audioflys 3rd moniker.

Working alongside Mulletovers Stuart Geddes, they have developed a very meldoic electronic ,yet driving House experience, instantly signed to Moodmusic, championed by Ewan Pearson and featured on Satoshi Tomies new Rennaisance 3D compilation.Loose lips is a collaboration with top female DJ/producer Scarlett Etienne….a very cool fusion of the styles of both artists,

the first track “Loose Lips sync ships” was imedeately signed by Kickboxer, with the follow-up “Earsex” soon to be put out on Tsuba.Opus Ink is a new collaboration with Satoshi Tomie which looks set to make some serious waves. Their first outing, The Boot Street Ep is a monstrous number, which unites elements of both their unique styles with a Carl Craigesq affair in demand by a lot of djs right now, but impossible to get hold of, to be released on SAW later this year. A collaboration with Paul Harris Break / Play which was featured on the Essential Selection.

A collab with James Talk, Cool Wet Grass featured on the Essential Selection and signed to Get Physical for the “Full Body Workout 3 EP.(Also featured on the Essential Selection.)THE REMIXERS In terms of remixes, Audiofly are becoming very sought-after producers, and has seen them remixing several underground anthems. Out this October is the Audiofly remix of the new Yoshimoto single, Want U to Hear me.

The Audiofly X remix of Claude Von Strokes The Whistler is also out later this AutumnUnder another alias, Rekleiner, comes the Compresor remix,( Sebastian Roya )on Connaisseur , And Sleeper Thief have remixed Phoniques What I fake out soon on Tiefschwarzs new label Souvenir