A Piano In My Pillow 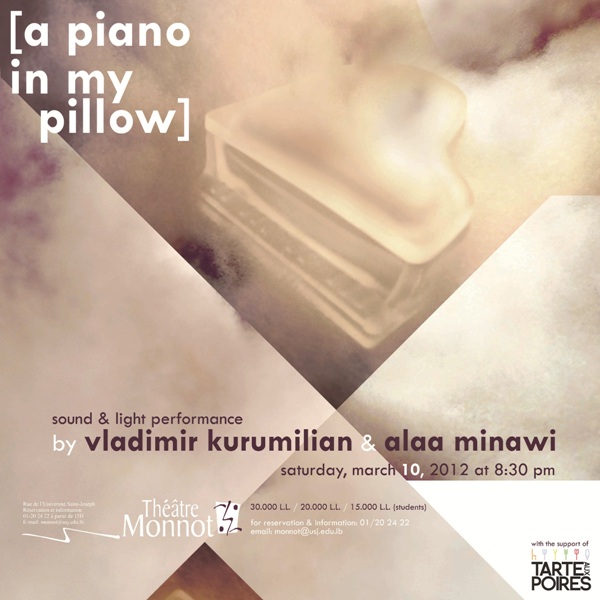 Name: A Piano In My Pillow

at Librairie Antoine (all branches) or Théâtre Monnot

Vladimir Kurumilian was born in Beirut in 1988.

He started his piano lessons at the age of 5 in the Lebanese National Conservatory while attending school and college. Vladimir is now working on his own improvisation project entre 2 crochets.

“It’s a matter of context. Listening to an improvised piece while creating it, recording it, and then listening to it again out of its original context.”

Improvisation is not a haphazard choice and the two brackets are not limits. Each performance is a unique experience, an instant state of mind that communicates to the public an emotional yet authentic vibe heavy with oriental influences, noted in itself, the themes as well as the rhythm.

His first appearance was in the performance ‘quand le rythme devient obsessionnel’, which was held in Théâtre Monnot on April 2009.

Alaa Minawi (b. Beirut, Lebanon) is a visual artist.

Since 2006, he has worked in more than 150 performances in Lebanon and the Arab world as a lighting designer, technical director, and performer. he collaborated with many renowned artists as Robert Wilson, Jawad Al Assadi, Andrey Barteniv, Rafic Ali Ahmad, Hiba Qawwass, Tania Saleh, Nagy Souraty, Lina Abyad and others…

He participated in several local and international theatre workshops and joined many festivals in Kuwait, UAE , Bahrain, Qatar, and USA.

In 2009 and 2010, he was asked to organize two street festivals and since then he also works as a festival coordinator.

He was the technical supervisor for Babel theatre in 2010 where he proposed a revolutionary plan to improve the theatre’s technical aspects. In 2011 he supervised the technical process of creating a new dance space in Beirut (maqamat dance house) alaa has a BA in Communication Arts from the Lebanese American University he directed a theatrical performance; “The Slaughter/Die Schlacht” written by Hiener muller and in the preparation phase of another one for 2013. Since 2010, alaa started experimenting with light sources in an attempt to understand their influence on stage and the surrounding.

In 2012, alaa minawi is preparing a series of installations that involves light as a breathing entity.

With the support of Tarte Aux Poires