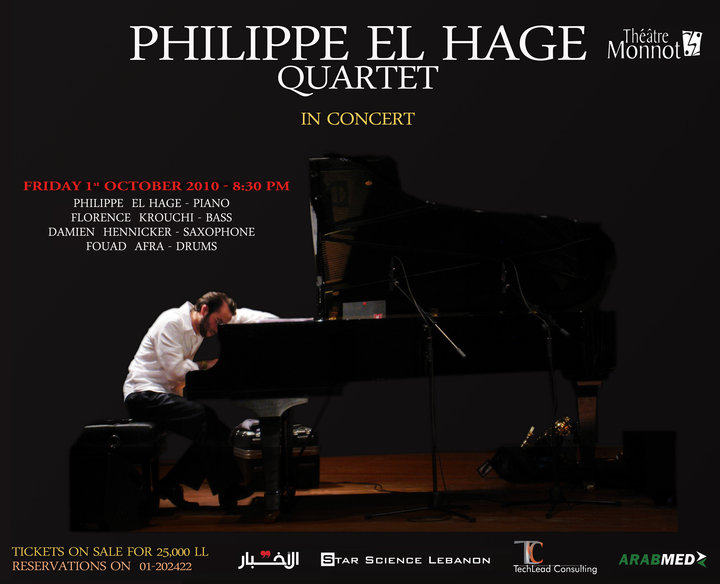 On Friday October 1st, the pianist-composer Philippe El Hage will be performing at theatre Monnot , along with talented French and local musicians.

BIOGRAPHY of Philippe El Hage :
Born in Byblos in 1979, Philippe began studying music in Lebanon. In 2000, he obtains a degree (DEUG) in French Literature from Saint Joseph University (USJ) in Beirut before moving to Paris to complete his piano studies at the Boulogne Billancourt Conservatory. He follows advanced courses for three years at the Regional National Conservatory (CNR) of the city of Rueil-Malmaison under Chantale Riou, obtaining the First Prize in Piano (Gold Medal). In May 2005, thanks to his piano improvisations, he is nominated for the Paris Young Talents 2005 Contest organized by the city of Paris.

After two years of advanced Piano Jazz courses at the Gabriel Fauré Conservatory under Francois POPINEAU, Philippe El Hage begins performing in Lebanon, France and Italy in concerts of classical music and improvisation. In September 2007, Philippe El Hage releases his first album, Byblos, which he recorded in France. He goes on tour with his new quartet, playing his own compositions, an original musical genre open to the world, reflecting his diverse influences: jazz, classical harmony and oriental (Near Eastern) music. In December 2008, Philippe EL HAGE releases his second album, Sunday Afternoon, recorded live in Beirut. He is now working on his third album to be released in 2011.