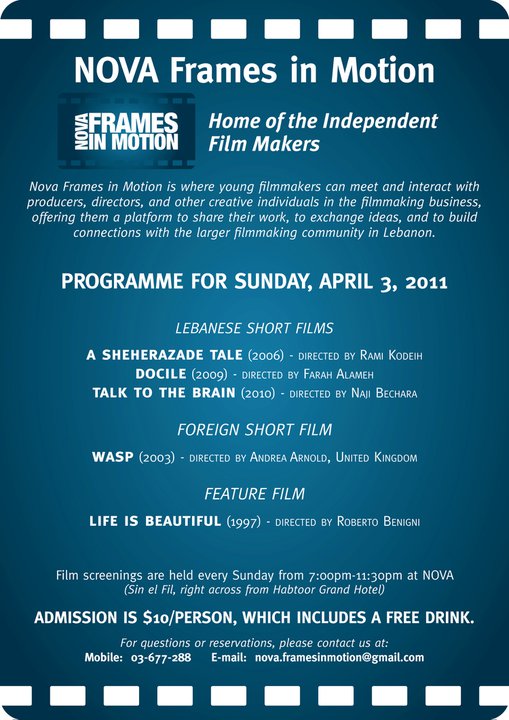 Details: Nova Frames in Motion is where directors, producers, film students, and other creative individuals involved in the film-making business can network and interact with each other. The aim is to encourage and nurture talent by offering young filmmakers a platform to share their work with others, to exchange ideas, and to build connections with the larger filmmaking community in Lebanon.

Ziad is a young student. He tells the story of his death in a common Lebanese neighbourhood in the southern suburbs of Beirut (HAY EL SELLOM, DAHIEH), where sometimes reality becomes a modern tale.

addicted to music and a great composer. He studied Cinema and

Audiovisual Arts in Alba (Académie Libanaise des Beaux Arts). His film is considered to be one of the most critically acclaimed student short movies in Lebanon, it won several awards locally and internationally. Rami has made 2 short movies so far and a numourous other ads, documentaries and corporate films.

Docile unveils an obsessive irrational love story: Salim falls passionately in love with Sahar, a mysterious young woman who charms him by her youthful, eye-catching and gracefully sadistic allure. In the heart of yearning fantasies and distorted truths, surrender and manipulation, Sahar ends up metamorphosing Salim into a dog.

Farah Alameh has studied at IESAV film school. She has a diploma in audiovisual studies and film diecting (2009). She took part in workshops for film directing and production in Cairo under the supervision of Mona El Sabban. Her graduation film “Docile” was ranked BEST PICTURE of 2009 in Saint Joseph University, in addition to a number of local and international nominatios and awards.

In a normal private Catholic school, a fascist RECTOR does his best to raise a worthy generation. Talk to the Brain is a satire on the current educational system.

Naji Bechara was born in Wuppertal, Germany on the 28th of June 1987. He graduated from Notre Dame University – Louaize in 2010 with a BA in Communication Arts: Radio/Television/Film with emphasis on Scriptwriting and Directing. He also took summer courses at the University of Southern California: School of Cinematic Arts in the Summer of 2008. He

Twenty-three year old Zoe ought to be wild and free but she’s already got 4 kids. Zoe is broke and her kids are hungry. She abandons them for an old flame while wasps are hunting for food around a rubbish bin.

A man has a wonderful romance with the help of his humour, but must use that same quality to protect his son in a Nazi death camp.

Film screenings are held every Sunday from 7:00pm-11:30pm at NOVA – Sin el Fil, right across from Habtoor Grand Hotel.

Admission is $10/person, which includes a free drink.