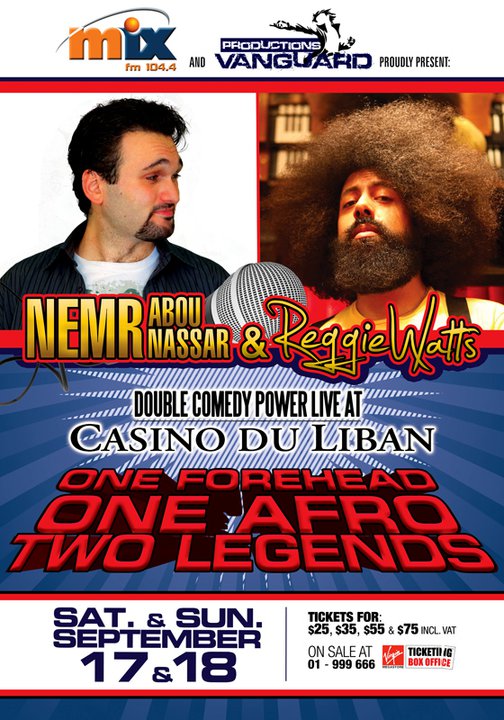 Details: Tickets now on sale at all Virgin Megastores across Lebanon!

One Forehead. One Afro. two legends

Following the historical record breaking 6 sold out shows of EPIC Nemr is back with Reggie Watts putting for the first time on one stage two of the world’s most exciting and hilarious stand up comedians!

“He’s amazingly talented…people like Reggie Watts come out and I think maybe open them up to new ideas about what comedy is, because he integrates music, hip-hop, comedy, and creates this… amazing performance” – Conan O’Brien

“Reggie Watts is the Coolest Comedian on the Planet” – GQ

“Reggie Watts—the man is nothing short of a comic genius.” – What It Is

Hilarious, brilliant, unpredictable – comedian/musician Reggie Watts is a staple of the international performance scene. Reggie’s improvised musical sets are created on-the-spot using only his formidable voice and a looping machine. No two songs are ever the same. An avowed “disinformationist,” Reggie loves to disorientate his audiences in the most entertaining way. You may not know what Reggie is going to do, but that’s okay – he doesn’t either.

As a solo performer, Reggie was handpicked by Conan O’Brien to open nightly on Conan’s entire North American “Prohibted From Being Funny on Television” tour. Reggie was featured “Hot Comedian” in Rolling Stone’s Hot Issue 2010 and featured profile in GQ’s Man Of The Year issue 2010. Reggie released his debut comedy cd/dvd ‘Why $#!+ So Crazy?’ on Comedy Central Records in May 2010.