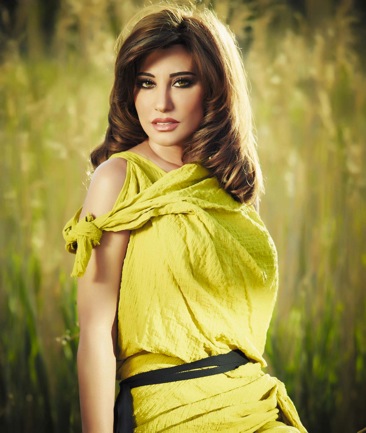 BIOGRAPHY
The famous Lebanese singer Najwa Karam was born on the 26th of February 1966 in Zahle, Lebanon. She is the youngest amongst her siblings; she has three brothers, Tony, Jean and Nicola and one sister, Salwa.

Najwa studied in Zahle and graduated with a degree in Philosophy, and later became a teacher for two years. Her musical talents were apparent from a young age but her father initially disapproved of her interest in a musical profession.

In 1985 Najwa joined “Layali Lobnan” the famous TV show that supports young talents. She was an immediate hit in that show and won the Gold Medal, which changed her father’s original opinion. After “Layali Lobnan”, Najwa participated in many concerts singing traditional Lebanese songs and joined the Arabic Music Institute for four years to improve her skills as a vocalist.

Her first official song was “Aala Zahle”. She followed it with “Batalet Soum W Sally” and “Eddam El Forsan”, before releasing her first album Ya Habayeb in 1989. Two years later, in 1992, Najwa released her second album, Shams El-Ghennieh. The album met with huge success in Lebanon and the name Shams El-Ghennieh (The Sun Of All Songs) has been associated with her ever since.

Naghmet Hob was a massive hit and one of the best-selling albums of 1994; the song “Law Habaytak – Ana Mafyee” launched Najwa Karam in the region and made her music known all over the Arab World. Najwa has released 14 albums so far, as well as a couple of singles and continues to impress us with her Lebanese style of singing. One of the highlights of her career was the duo “W kberna” with Lebanese music icon Wadih el Safi.

She participated in many festivals in many countries around the world, such as, America, Europe and Australia. Her concerts at the Jarash Festival in Jordan are considered the most successful concerts in the festival’s history. Najwa’s performance at the Carthage Festival in Tunisia is also considered to be among her greatest concerts.

She also participated in Major Festivals all around the Arab World, in Lebanon, Libya, Egypt, UAE, Kuwait, Qatar and Syria. If anyone was responsible for the rebirth of Lebanese song, it would be Najwa Karam.

She has received awards all throughout her career, from trophies to keys of cities and much more. She is considered the best-selling and performing artist of her time, and the success continues…