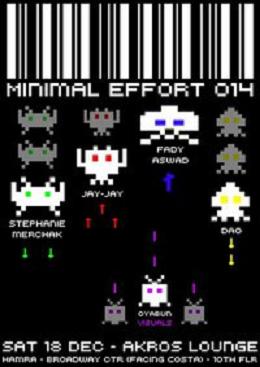 With an academic background and technical expertise in music going back decades, Stephanie Merchak’s first endeavors into the realm of electronic music came in 2004. As one of Lebanon’s only professional female EM producers, she has been working on bringing out her own touch of experimentalism in what could be categorized as IDM or alternative electronica. Her exposure has substantially increased in the past 2 years after winning 3rd prize at Radio Lebanon’s “96.2 Modern Music Contest” and following it with a live performance at The Basement. Stephanie is currently working as an editor, composer and sound designer for Audiotakes Sound Design.This is the second time she performs at Minimal Effort.

Jay Jay, also known as Lady J, is no stranger to the EDM circuit in Lebanon. Gradually honing her skills since the 1990s, she started making her first appearances at clubs and various venues all over the country which brought her a considerable amount of recognition. 2003 was a marking point for Jay Jay as she was nominated by none other than Paul Oakenfold during The Heineken Thirst competition, a nomination granting her further exposure. Ever since, she’s been showcasing her skills at all kinds of parties, also playing alongside international credits that include Pete Tong, Deep Dish, Sander K, Chris Lake, Andy Moor..This is The second time she performs at Minimal Effort.

With more than a decade’s experience, Fady Aswad could be considered a pioneer when it comes to the techno scene in Lebanon. Going back till 2004, Fady was always around, playing all kinds of venues, striving to give the techno scene a boost. He later joined the Vibe Lebanon label and became a resident of the infamous Silver Factory parties. Following the ‘less is more’ ethical code, Fady launched the first Minimal Effort parties in 2008, taking place anywhere from a parking lot to a saj bakery in Monot with much success, showcasing his brand of speedy hypnotic techno.

An audiovisual major, Dao has always had an interest in the connection that exists between organic sound and music which can be clearly witnessed through his experimentations on sound design/field recordings. With an unequaled taste in music and a distinct ear for anything new and innovative, Dao shows no boundaries as to the genres he plays going from ambient and IDM to breaks and glitch hop. He’s currently resident of the DMG crew and playing Minimal Effort for the third time.

Despite uncertainty about his origins, most studies have concluded that Oyabun was born during the 8-bit 3rd generation console era. A visual machinist with website-mastery as his day job and the servitude of the corporate warmongers as his major; Oyabun draws inspiration for his visuals from the images etched unto his mind by video games, anime and class-b movies.

Minimal Effort is a series of EDM parties taking place in the most unlikely venues; from an underground parking to a small saj-bakery in Monot.

Originating in 2008, the concept behind it was and still is to discover and promote new talents within the Lebanese EDM scene as well as spread and endorse the latest sounds that have emerged out of the scene the last few years.

While our main focus remains techno in all its forms, with 13 editions so far, we have hosted many artists and covered a wide array of genres:

Live IDM & experimental music with Stephanie Mershak and Liliane Chlela, IDM, IDM/Dubstep and Electro/Broken-Beat with Necrostate and Dao; Minimal and Techno with Fady Aswad, Rabi-h and Cheh; Microhouse and Techhouse with Bas Sam, Purple, Jay Jay and Alias; Dubstep with Makh and Dublack203; Live Breakbeat/Electro/Dubstep with Radio-KVM and OKIDOKI; Drum & Bass with Tavarish.

Moreover, Minimal Effort has hosted the first “UK night” in Lebanon, a night showcasing the recent twist that has taken the UK underground electronic scene, a night entirely dedicated to Dubstep, Drum N’ Bass and Breakbeat.

In a short amount of time, and thanks to the massive support of the DMG crew, Minimal Effort became a success and gained recognition as being one of the best parties in town.