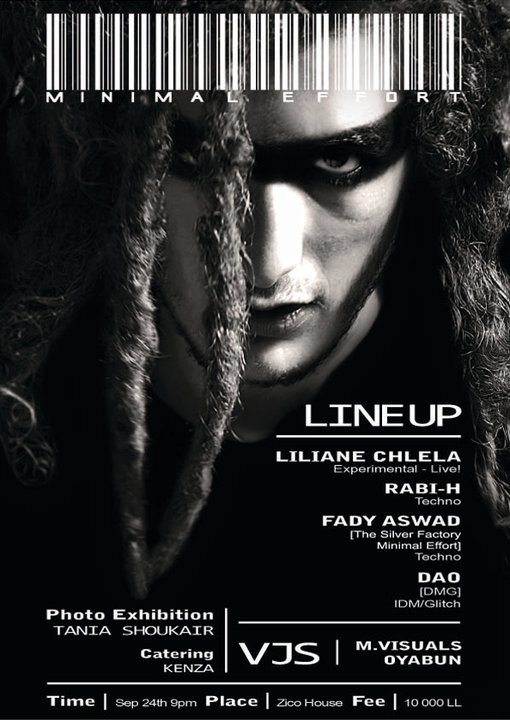 Minimal Effort comes back with a blast, offering you quite a treat this time around. Celebrating its second anniversary, the night will kick off with a photo exhibition and buffet. What follows is a feast to the tech-loving ears and motion-craving bodies. With everything, from a live experimental performance to back-to-back techno sets, this night is sure to be one for the books.

…- Tania Shoukair
Majoring in visual communication, Tania’s interest in photography arose at the tender/early age of 16 when she started shooting experimental self-portraits in her own bedroom with a beginner’s camera. The fact that she herself was her own personal model led Tania to kindle a talent in both make-up and costume design. Her style is often defined as minimalist in tone with hints of expressionist lighting. Minimal Effort is proud to give you Tania Shoukair’s first official exhibition.

– Rabih Hamad AKA Mr H
Rabi-H is no stranger to techno. Being one of the first to witness the burgeoning of the new techno sound, Rabi-H managed throughout the years to develop his own signature style. His brand of dry bass-heavy techno has won over many a technohead’s heart over the years, playing in all kinds of environments, be it outdoor raves, boat parties or underground parties, putting him at the helm of the underground techno scene. A regular patron of the Minimal Effort game, Rabi-H will be gracing us with a farewell set before his unfortunate departure from the country. Brace yourselves for one hell of a set !

– Fady Aswad
With more than a decade’s experience, Fady Aswad could be considered a pioneer when it comes to the techno scene in Lebanon. Going back till 2004, Fady was always around, playing all kinds of venues, striving to give the techno scene a boost. He later joined the Vibe Lebanon label and became a resident of the infamous Silver Factory parties. Following the ‘less is more’ ethical code, Fady launched the first Minimal Effort parties in 2008, taking place anywhere from a parking lot to a saj furn in Monot with much success, showcasing his brand of speedy hypnotic techno.

– Dao
An audiovisual major, Dao has always had an interest in the connection that exists between organic sound and music which can be clearly witnessed through his experimentations on sound design/field recordings. With an unequaled taste in music and a distinct ear for anything new and innovative, Dao shows no boundaries as to the genres he plays going from ambient and IDM to breaks and glitch hop. He’s currently resident of the DMG crew and playing Minimal Effort for the third time.

– Oyabun
Despite uncertainty about his origins, most studies have concluded that Oyabun was born during the 8-bit 3rd generation console era. A visual machinist with website-mastery as his day job and the servitude of the corporate warmongers as his major; Oyabun draws inspiration for his visuals from the images etched unto his mind by video games, anime and class-b movies.

– M-Visuals
One of the most asked-for professional visual jockeys in Lebanon, M-Visuals has displayed quite an eclectic taste throughout the years he’s been active, mixing surreal imagery and eerie scenes that always seem to be in sync with the music being played. With a long list of credits, this is Mahmoud’s third time playing Minimal Effort.

– Kenza
Kenza’s open banquets and buffets offer the tastiest in everything from hors d’oeuvres and appetizers to cakes and brownies. Whether it’s sweet or salty you’re looking for, your catering needs are bound to be satisfied.