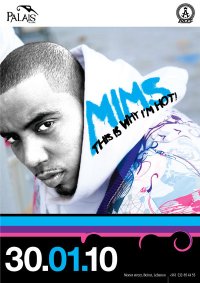 Shawn Mims, Jamaican-American rap singer, grew up in Harlem. At 13, his parents died, leaving him only with his first set of DJ equipement.

His first release “Love em ALL” was nominated best video in the 2001 music awards.

“I did you wrong” was released in 2003, thanks to the help from Miami based production team the Blackout Movement, and in 2006 MIMS independently released This is Why Im hot, the song did well enough to launch his “Album Music Is My Savior”.

New York’s MIMS aka MR. “This Is Why I’m Hot” will be performing LIVE for the first time in Lebanon at Palais with Banging Hits “Like This”, “This is Why I’m Hot” & “Move if u Wanna” to mention a Few!