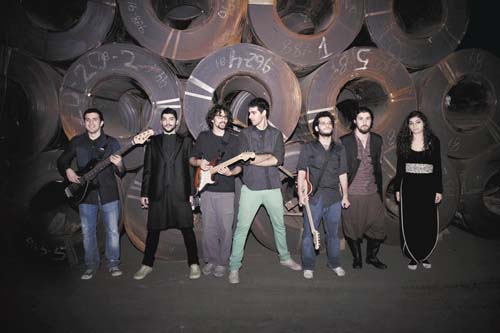 After just one album, Mashrou’ Leila have become Beirut’s hottest young band. Their style, a unique blend of sharp Lebanese lyrics and Mediterranean pop music, sounds instantly familiar yet completely original. Their performance at Byblos, eagerly awaited by fans, will take place in a surprise setup and will include several new songs. 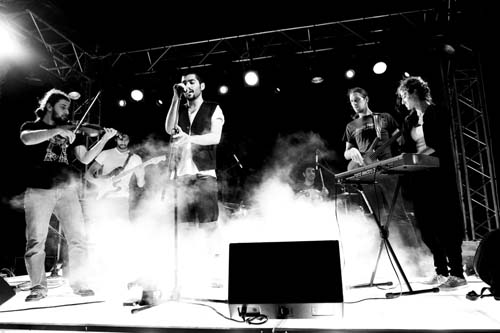 BIOGRAPHY Mashrou’ Leila is a Lebanese band that brings something fresh and new to Beirut’s alternative music scene. Their first single “Raksit Leila” can be heard all around town, appealing to a very diverse cross-generational audience. “Mashrou’ means “project”, “Leila” means “night”. Mashrouʼ Leila is Arabic for “an overnight project” and not – as the band members teasingly like to pretend – a project started to raise money for a girl they knew called Leila. The “project” their name refers to, is the music workshop where they all met at the American University of Beirut in 2008: a singer, a violinist, a pianist, two guitarists, a bassist and a drummer using an open platform to experiment with sound. The seven members – all in their early twenties – play a unique blend of Arabic and Western musical influences: you’ll find hints of Tarab, rock, folk pop, latin-jazz, ethnic music and electro. Their music refers to different genres; but whatever you say, don’t call it fusion! Crossing over from underground to pop, Mashrou’ Leila have crafted catchy tunes with sharp Arabic lyrics. They react to whatever is around them and sing about their daily lives, a lot of their creative energy coming from the city they live in: Beirut. Their first big break came after they appeared at the “Fete de la Musique” on June 21, 2008. Fans started blogging about the band and the members decided to take things more seriously. They performed all over Lebanon taking over public piazzas as well as clubs, pubs, and concert halls. In March 2009, Mashrouʼ Leila won the Lebanese Modern Music Contest jury prize organized by Radio Liban as well as the public vote. They released their debut album with B-root Productions in December 2009 at what turned out to be Beirut’s biggest alternative (read non-mainstream) event in recent years. Their concert in Byblos on July 9th is one of the most anticipated events of the summer. It is their first live appearance since the album launch and their biggest gig yet. They’ve even prepared a special treat for their fans: their set will include all their best-known tracks well as a number of new previously unreleased songs! Band Members Hamed Sinno: Vocals Ibrahim Badr: Bass Carl Gerges: Drums Haig Papazian: Violin Omaya Malaeb: Keyboards Andre Chedid: Guitar Firas Abou Fakher: Guitar