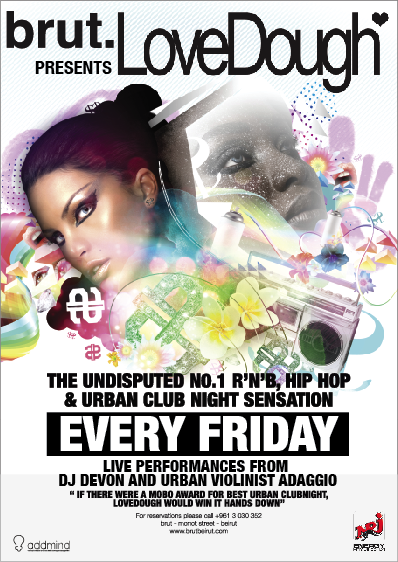 Known as the leading RnB & Hip Hop brand in the UK, LOVEDOUGH will be back at BRUT this FRIDAY after the great success !!!!!! Let’s see if we can top last week!!! I’m sure we can!!

We also lined up DJ DEVON again as he played an unbelievable set last week and we can’t wait to hear him again!!!

But this time there will be another Guest Star performing live…

With DJ DEVON (The Game)

From humble beginnings as a bedroom DJ, Devon honed his skills as a turntablist studying the art of scratching and beat juggling from legends DJ Ca$h Money, Jazzy Jeff and Qubert.  Instantly noticed  for his uncanny ability to mix and blend Devon was picked up by the likes of Shortee Blitz and DJ Kofi and joined Hollywood DJ collective the Bum Squad and now spends his days Djing in between England and the US for the likes of rap superstar The Game.

And another Guest from the UK…

Estelle’s Violinist Adaggio has taken the urban and classical world by storm with his take on the traditional art by fusing it with a much more contemporary sound.

His unique flare for the violin has had him noticed by MTV and Estelle which has lead to solo performances in some of the worlds most prestigeous events, from the MOBO’s to the Baraine Grand Prix!

This is an event not to be missed!!

Hope to see everyone down again from last week!! And if you didn’t make it down make sure we see you this LOVEDOUGH!!