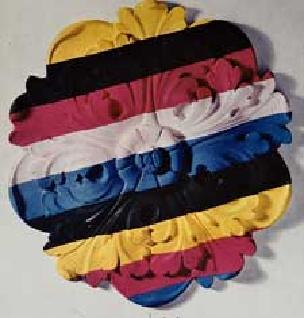 Call it A Cat when it Grins: GRAPHIS N° 127
A Lecture-Performance by Rana Hamadeh at Beirut Art Center

In one of his musings, bedridden French poet Joë Bousquet, shot in a battle during World War I, pronounces himself destined to become the offspring of his wound; that ‘[his] wound existed before [him], [he] was born to embody it’. Contemplating the ‘wound’ in relation to such a counter-intuitive statement, Rana Hamadeh’s lecture-performance will set… off a trail of questions and associations that reflect upon the ethics of masquerade: the role-play between bodies and events, absences and presences, language and the objects of language.

Taking a graphic design magazine penetrated during the Lebanese civil war by a bullet, as its point of departure, Hamadeh’s lecture-performance Call it A Cat when it Grins: GRAPHIS Nº 127 will question the constructions of history and futurity through the play among several tenses, telling lies, believing them, posing questions, answering some and regretting answering the rest, building, demolishing, hesitating, killing, living and letting live, becoming Alice, becoming a cat, grinning, masquerading, etc.

Free Entrance
Because of limited seating, it is advised to book in advance by calling us on 01 397 018.
Reserved seats will be held until 15 minutes before the event begins.