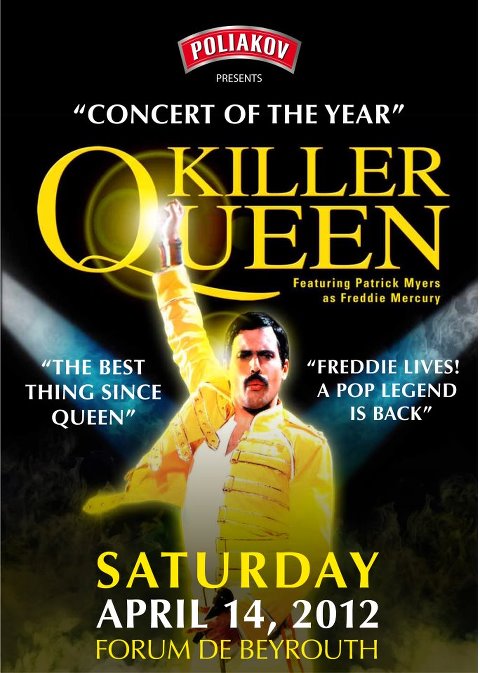 Details: Poliakov Vodka Proudly Presents the Acclaimed Full Stage Show that has been touring all over the world selling out arenas of 10,000 to 30,000 fans:

A Superb tribute to Freddie Mercury in the most spectacular stage set up, incredible musicianship, exceptional showmanship, stunning costumes and mind-blowing special effects

Patrick Myers presents the real live QUEEN experience – the sound and the look, combined with the showmanship, pomp, style and incredible musicianship that was the hallmark of QUEEN in concert.

Killer Queen takes its mission very seriously. Everything, from the curls of Brian May and Freddie Mercury’s distinctive teeth up until the concert’s final piece is virtually identical to the original.

Killer Queen has won several top awards, including the “Best Tribute Band in the World”(2005) and “Best Concert in 2009”.

Bohemian Rhapsody, Another One Bites The Dust, We Will Rock You, We Are The Champions, Break Free, The Show Must Go On, Don’t Stop Me Now, Killer Queen, Crazy Little Thing Called Love, Somebody to Love, A Kind of Magic, Radio Ga Ga etc.

Patrick Myers presents this superb tribute to Freddie Mercury. Patrick has performed all over the world; Estonia, Moscow, Madrid, Dubai, Kiev, Portugal, Ireland, the Azores and Bangkok as well as an impressive list of dates in the UK including the Strand Theater in London’s West End, the Albert Hall and the Birmingham NEC.

He’s rocked 25,000 strong crowds in his outdoor shows which include Brands Hatch and Dubai Stadium

Queen’s tour crew, the legendary Crystal and Ratty, have seen his show several times and given it the ultimate official stamp of approval. “The man upstairs would have loved it!”

It was precisely Killer Queen whom Sir Bob Geldof chose to play at the second major LiveAid concert in 2005 at the Wembley Arena. At that concert, Killer Queen shared the stage with such world music tops as U2, Sir Paul McCartney and Phil Collins.

The biggest solo concert of the tribute band was thus far in 2009 in Holland where about 80 000 spectators showed up, repeating Queen’s own success from 30 years ago at the same stadium.

“Fabulous stage show and presentation, the singer Patrick Myers is the closest yet to Freddie in looks and dynamics!”

“Concerts as near to the real thing as you’re likely to get. A real life Bohemian Rhapsody. Freddie Lives! A Pop Legend Is back” (The People)

“Killer Queen is a living jukebox, an absolutely fantastic show. This an evening where you feel the hair stand on the back of your neck. I’ve never seen the arena explode with such an electric charge. The sound is perfect…A Concert to remember” (The VLT – Sundsvall Sweden)

Very accurate. Almost frightening. The show, singing, music and appearance are unbelievably similar to the original. Skipping across the stage with his three and half octave broad tenor powering through the arena, Patrick’s spark set the 10,000 Ahoy audience on fire . They danced, sang and clicked their fingers, all under Myers’ direction.

The fabulous Killer Queen came on stage. What an impact! Mirage or Resurection? The group voted best tribute in the world entirely succeeded in resurrecting Freddie Mercury both physically and vocally. You almost believe you were at Wembley Stadium back in 1986. (Voix Du Nord. France.)

“Authentic sound and visuals” (Time Out)

Produced and organized by Poliakov Vodka

This event is strictly for 18 yrs old +

TICKETS from all VIRGIN BO Branches:

Newer Post Good News for Hip-Hop: NAS is back and Life Is Good!
Older PostKev Orkian Live In Lebanon