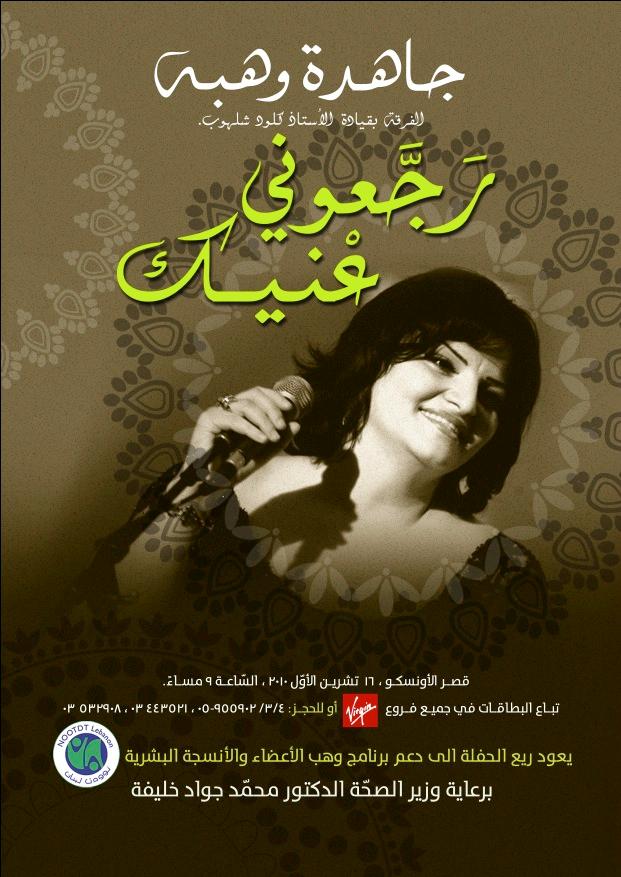 NOOTDT-Lb has organized a fundraising concert on the occasion of the “Journée mondiale du don d’organes et de la greffe – 17 octobre”,
At the Unesco Palace on the 16th of October 2010 at 09:00 pm.

Jahida Wehbe is a true all-rounder of a performer. Poet, comedian in the theatre, on television and in film, orator of poetry, she is also a singer/songwriter. Her voice gets into our very souls, A silken voice, the top tarab performer, says the Arab press about Jahida Wehbe.
Jahida Wehbe studied at the Lebanese University; she receives a BA in Psychology from the Lebanese University and at the Lebanese National Conservatory of Music where she learned oriental song, Syriac chant, Qura’nic recitals, and to play the ‘ud (Middle Eastern lute).
She also holds a Master’s Degree (MA) in Acting and Directing from the Lebanese University – School of Fine Arts. Jahida is a member and the President of the Culture and Programs Committee at the Professional Musicians Syndicate in Lebanon, she is also a member at SASEM.
Working with the great Lebanese theatre producers soon made her famous in Lebanon. At home she is not only known for the exceptional quality of her voice but also for the strictness with which she chooses her repertoire. She only sings songs that were either composed for her, or were composed by writers of the inimitable 20s, such as Zakaria Ahmad, Sayed Darwish and Mohamed Kassabji. The words are always those of great poets.
Jahida Wehbe is known for her brilliant technique, scintillating performances and impeccable skills. Her musical sensitivity and ability to improvise and embellish the basic rhythmic patterns familiar to Arabic Music, as well as her extensive knowledge of ethnic musical history have made her unique.
Her music and melodies are inspired by the solidity of the lyric and from a profound feeling of the rhythm of the word. The intermarriage between word and tune takes us into the whole world.
Throughout her extensive career, Jahida Wehbe has been performing various styles of music ranging from Classical music, Sufi, patriotic and traditional Arab music, as well as Arab fusion music. Considered one of the most outstanding singers, she has toured throughout the Middle East, Europe, Canada, America, and Australia, and made a significant difference in bringing the beauty and rich cultural history of Middle East through music to occidental Audiences.
Jahida Wehbe has been performing live, touring several countries, venues, and festivals, carrying the torch of excellence and quality music wherever she performs
Jahida Wehbe is acknowledged not only for her musical talent and contribution, but also as a cultural icon acclaimed by millions worldwide.
Wehbe has headlined at the most prestigious venues in the world; her music lies at the crossroads of East and West, combining old and new, blending classical Middle Eastern instruments with modern sound technology.
Setting poetry to music, Jahida’s vocals honor the words of Arab poets, combining the language of life and love with today’s endless musical possibilities.
Jahida has played several main acting and singing roles in many avant-garde Lebanese and Arab Directors plays such as “Ayyam Ruba’iyat Al Khayyam” produced by Baalbek International Festival, “Ounshoudat al Matar” directed by the Iraqi Jawad Al Assadi and “Sakhrat Tanios” directed by Gerard Avedissian, “Nisa’ el saxophone by the Iraqi director Jawad al-Assadi,” and the film, “Shula Cohen, the Pearl – directed by Fouad Khoury. Moreover, she has participated in several television series and films. Jahida was awarded the first prize at the Lebanese University for her film “Rassasa Farigha” or void bullet.
She has worked with prominent Arab Artists such as Wadih El Safi, Elie Shwayri, Zad Multaka, Ziad Boutros, and others…
On the other hand, Jahida has paid tribute to many of the most famous Arab singers such as Oum Koulthoum, Wadih El Safi, Mohammed Abdel Wahab, Asmahan, Sayyed Darwish, Mohammed Abdel Muttalib, Feyrouz…
She has performed in many poetry reading events where she has composed music for lyrics by many Lebanese, Arab and International poets such as: Ibn Arabi, Rabi’aa Al’adawiya, Jalal Eddine El Roumy, Mahmood Darweesh, Ounsi El Hajj, Talal Haidar, Jibran Khalil Jibran, Badr Shaker Assayyab, Nazek Al Mala’ika, Gibran, Goethe, Adonis, Taghor…
She officially represented Lebanon in several seminars and events such as: The Cultural Arabic Festival in Europe / Alrouwwad Al’ Arab Festival sponsored by the Arab League / The Arab Music Festival in Cairo Opera House/ Jarash Festival in Jordan/ Santa Cecelia Festival in Rome (she was the first Arab singer to sing at this festival)/ Frankfurt’s Book Festival in Germany….
She performed in many concerts in Lebanon and abroad in collaboration with several cultural organizations and artistic institutions on both the regional and international levels. Moreover, several Arabic and international festivals and events have awarded and honored her.
Jahida represented Lebanon and the Middle East in the “Arab Women’s Excellence Forum” in Istanbul as well as in one of the world’s most important festivals entitled ‘Fez Sufi Hymnals’ held in Morocco in June 2007.
Katabtany, her record-breaking album made headlines worldwide. It comprises musical compositions of her own and lyrics by Gunther Grass (Nobel Prize in Litterature 1999), Ahlam Mustaghanmi, Unsi El Hajj, Talal Haidar, Amal Al Jiboury, Lamee’ah Amara, Al Hallaj, and Abu Firas Al Hamadani.
Within a year, that album was breaking record sales throughout the Middle East and gave Jahida additional taste of success. Since then, Jahida’s voice has brought her fame throughout the Arab world and beyond. She hasn’t rested on his laurels but released “Ayyouha el nesyan habni koublatak” album, as a part of Ahlam Mostaganemi’s book Nesyan.com, an album that has brought something new and different. Jahida continues to push the envelope.