Calendar
Mahmoud Abdullah
We regretfully inform u that Hadley’s event @ Noir tomorrow has been cancelled because Hadley couldn’t leave New York due to bad weather conditions.

The event will be rescheduled and the date will be announced shortly. 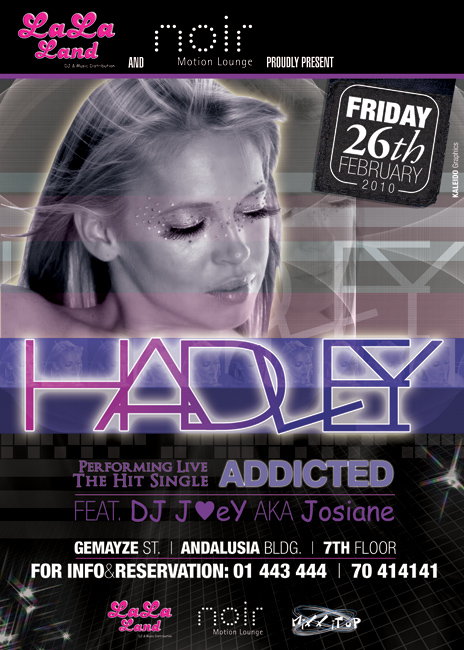 “HADLEY”, one of the world’s Sexiest Progressive Vocalist, Live @ NOIR on Feb 26th…

Performing her new singles “Wanderer”, “Midnight Train”, “Peace on Earth”, and her current hit single “Addicted” with Noir’s Resident DJ “J♥eY” aka Josiane, who will be spinning the latest House & Progressive music !

“Making her official debut as a featured artist on Serge Devant’s recent album Wanderer, Hadley is starting to make her mark as one of the new artists to watch for in 2009.”

“Hadley is currently working on Serge Devant’s 2nd album as well as various other collaborations including one with new breakout producer Danny Inzerillo”.