Gunther And Stamina Present CID INC At B018 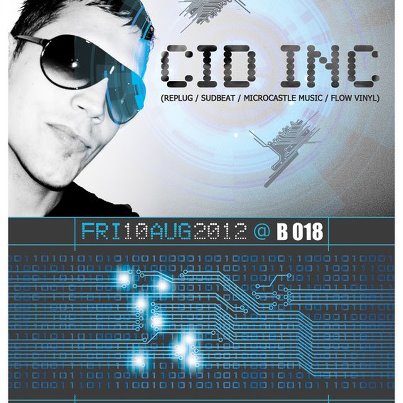 Name: Gunther And Stamina Present CID INC At B018

When we first got to know Henri Hurtig, he was rocking dance floors with his Mashtronic project.

By the time we decided to host him in Beirut in 2008 he had just started performing as Cid Inc, a project we firmly believed in from the start, and we were right on spot!!

Cid Inc’s music has since been regularly featured on the playlists of Hernan Cattaneo, John Digweed, Nick Warren and Henry Saiz to name a few…and released on prominent labels such as GU, Bedrock, Baroque, Sudbeat…

Beatport selected Henri as one of their Progressive House Artists of 2009 alongside other great names like Charlie May, Guy J and Pole Folder. He is also part of the recently launched Global Underground World Tours roster and the founder of Replug records.

Cid Inc has a very soft spot for Beirut, and his annual tour on the global house circuit always leads him back to B018 where he has become a crowd favorite indulging us with his long and intoxicating sets.

So what exactly is the Cid Inc sound?

“Hypnotic progressive house with a touch of techno and deeper sounds is the music I like to play,” explains Henri. “It’s that hypnotic feel I look for in music. I definitely enjoy playing longer sets too – they give me the opportunity to take the crowd on a journey and the ability to play a wider range of music. I’ve had some great gigs in South America recently, but it doesn’t really matter where I go, I enjoy playing everywhere.”

AS WE SHALL BE CELEBRATING HENRI’S BIRTHDAY ALL TOGETHER WITH AN EXTRA-SPECIAL CID INC SET.