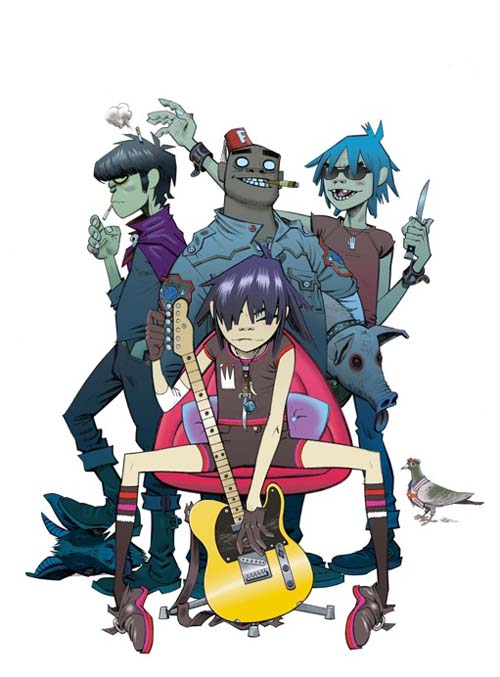 World’s most successful virtual band gets real at Byblos for one exceptional night. Along with Gorillaz’ spectacular video characters, Damon Albarn will be joined on stage by a full festival line up: The Clash’s Mick Jones and Paul Simonon, Mos Def, Bobby Womack, De La Soul, Shaun Ryder (Happy Mondays), Mark E. Smith (The Fall), Gruff Rhys (Super Furry Animals), accompanied by 30 musicians.
Gorillaz might well be the most exciting live band of 2010. 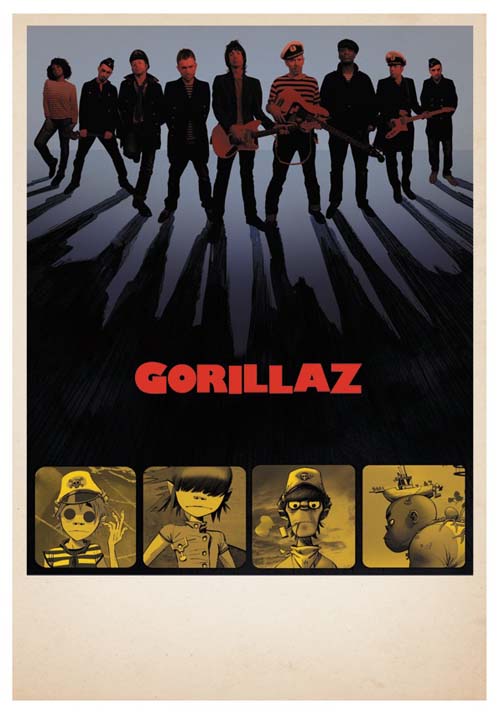 BIOGRAPHY
Gorillaz are a British virtual band created in 1998 by comic-book artist Jamie Hewlett — best known for his work on Tank Girl — and Damon Albarn of Britpop band.
The band is composed of four animated band members: 2D (lead vocalist, keyboard), Murdoc Niccals (bass guitar), Noodle (guitar and occasional vocals) and Russel Hobbs (drums and percussion). The band’s music is a collaboration between various musicians, Albarn being the only permanent musical contributor. Their style is a composition of multiple musical genres, with a large number of influences including: dub, hip hop, alternative rock, electronic and pop music.
Despite their fictional nature, Gorillaz have participated in as many activities as a real band would. They have been on a world tour, released albums and singles, made acceptance speeches at award shows, given print and radio interviews, talked with fans on their website, amongst other things. These were all possible due to the utilization of a vast array of modern media and a huge range of talented artists who have all played their part in bringing Gorillaz to life.
The band’s 2001 debut album Gorillaz sold over seven million copies and earned them an entry in the Guinness Book of World Records as the Most Successful Virtual Band. It was nominated for the Mercury Prize 2001, but the nomination was later withdrawn at the band’s request. Their second studio album, Demon Days, was released in 2005 and included the singles “Feel Good Inc.”, “Dare”, “Dirty Harry” and “Kids with Guns”/”El Mañana”. Demon Days went five times platinum in the UK, double platinum in the United States and earned five Grammy Award nominations for 2006 and won one of them in the Best Pop Collaboration with Vocals category. Gorillaz have also released two B-sides compilations and a remix album. The combined sales of Gorillaz and Demon Days had, by 2010, exceeded 20 million albums.
Plastic Beach, the band’s third studio album was released in April 2010. A spectacular outlet for Albarn’s mix-and-match musical outlook, it features guest performances by The Clash’s Mick Jones and Paul Simonon, Snoop Dogg, Lou Reed, Mos Def, Bobby Womack, Gruff Rhys, Mark E. Smith, Kano, Bashy, De La Soul, Little Dragon, Hypnotic Brass Ensemble, sinfonia ViVA, and The National Orchestra for Oriental Arabic Music.

Their concert at Byblos Festival on July 20 will be Gorillaz’ 5th festival appearance of the year (after Coachella Music Festival in California, Roskilde Festival in Denmark, Glastonburyin the UK and Benicàssim in Spain). The performance will include a full production, featuring video animation, artwork and film by Jamie Hewlett. Impressively, Damon Albarn will be joined onstage by most of the contributors to Plastic Beach: The Clash’s Mick Jones and Paul Simonon, Mos Def, Bobby Womack, Gruff Rhys (Super Furry Animals), Mark E. Smith (The Fall), Kano, Bashy, De La Soul, Little Dragon, Hypnotic Brass Ensemble and The National Orchestra for Oriental Arabic Music!
They will also be joined by Shaun Ryder (Of The Happy Mondays) & Rosie Wilson on “Dare” as well as Bootie Brown on “Dirty Harry”!
A full festival line-up for one crazy night!