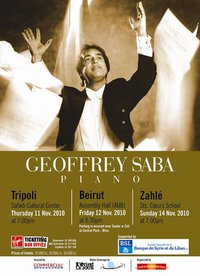 Geoffrey Saba at AUB Assembly Hall
Geoffrey Saba is a classical concert pianist. He has lived in England for over thirty years. In the 1970’s he made his London début and was awarded a bronze medal at the First Arthur Rubinstein International Piano Master Competition. Regular touring now takes him to North America, Eastern and Western Europe, the Middle East, India, Japan, South East Asia and his native Australia, and he has played at Festivals in Sydney, Adelaide and South East Asia.