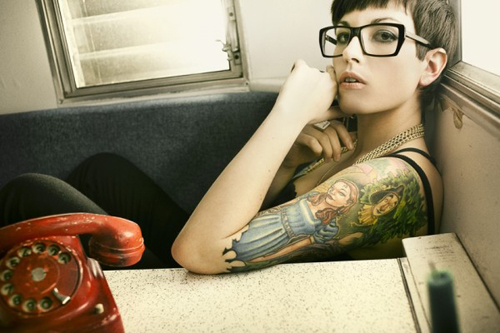 At the Basement
It is Safer Underground

DJ Mini was born in Rimouski, Québec. Soon relocated in the middle of Montreal’s urban jungle, the young Evelyne Drouin slowly builds up a passion for the sounds of techno and electro.

A versatile artist with as much experience in production than in mixing, in minimal than in breakbeat, in party nights than in artistic demonstrations, Mini makes giant steps in a lot of clubs and quickly imposes herself as an important figure of the Montreal underground. Her *Audio Hygiene* album created big waves, even reaching out to Quebec’s usually electro-free mainstream media.
She has filled the Parking nightclub every Thursday for the past seven years with the help of many famous guests as the curator and resident DJ of the legendary Overdose parties. Those crazy nights have seen the likes of Richie Hawtin, Laurent Garnier, Ellen Allien, Tiga, John Acquaviva, Boyz Noize, Zombie Nation, David Carretta and Felix DaHousecat on the selector.

Mini also helped tons of new Montreal DJs to get notice from the Montreal electro fans by inviting them to Overdose, that is now a reference in the province and even the rest of Canada. Her collaborative spirit made her work with the Lesbians on Ecstasy, produce and receive tons of high quality remixes.