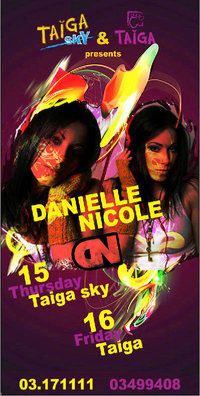 Bio:
danielle nicole, who has been playing the flute since the age of six and the piano since the age of twelve, made her debut in the electronic dance music scene in early 2005. after being introduced to the underground dance music culture while attending college at nyu, she was captivated by what djs were able to create on the dance floor at the legendary sound factory and vinyl night clubs. the twenty year old then decided to follow her true passion… music.

in 2006, danielle landed herself a monthly residency at the roxy, the biggest & most renowned dance club in boston, ma. shortly thereafter, she also established her very own dance party in nyc called “di.sfunk.tion,” which escalated this young lady to a recognizable status drawing crowds on a monthly basis. between traveling across the county and holding it down in nyc, the rising star managed to catch the attention of dj/producer jonathan peters. danielle was privileged to work closely alongside the longtime manhattan dance music icon throughout 2006.

danielle has also taken her career international. in 2007, aside from being featured on various satellite xm radio shows, she headlined the annual ‘hypnotiq’ party in puerto rico, which is the largest dance music event of the year. recently, danielle headlined the annual central american music conference, ‘feria de la rumba’, which took place in panama city and she has established quite a presence in the dominican republic where she played at the tao room in santo domingo and moma in santiago.

danielle has also been the first female signed to hushtek recordings, a minimal/techno division of hush recordings, and recently released her first 2 ep’s, entitled tambiama and phonographic, available to listen and purchase on beatport.com, masterbeat.com, and juno download. danielle has also released 3 remixes on dirty beats, including 2 d-unity remixes for audion tube and fuck the system. stay tuned for her next ep, native circus, which will be released in the spring of 2010.