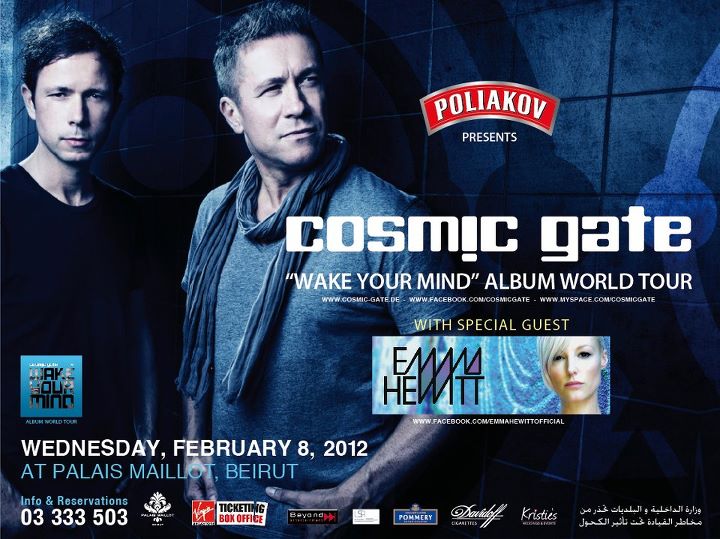 Be prepared to be musically Revitalized Again!

4 artist albums, 28 singles and 46 remixes, 4 Back 2 Back mix-compilations, a 1000+ international gigs played and clubbers, numbered in their millions, thrilled … all from one chance meeting in a record label office.

Nic and Bossi’s Cosmic Gate’s partnership has proved to be one of electronic dance music’s most successful, and one of its most enduring.

Creating a perfect in-studio/​behind-the-decks storm, 10 years into their career they became the highest-climbers on DJ Mag’s 2009 Top 100 chart and landed back amongst the 25 biggest DJs in the world the following year. Powered by their hugely received albums, club-rocking singles (inc. ‘Not Enough Time’, ‘Body of Conflict’, ‘Analog Feel’ and ‘F.A.V.’) and scene-defining classics ‘Fire Wire’ and ‘Exploration of Space’ their space in EDM’s hall of fame has been secured.

Cosmic Gate re-team with one of dance music’s hottest vocal properties for the first major single to be taken from their forthcoming artist album ‘Wake Your Mind’.

Now, setting a major sound precedent for their fifth studio long-player, ‘Wake Your Mind’, Cosmic Gate scale new career heights with the mighty ‘Be Your Sound’.

Having previously collaborated on ‘Not Enough Time’ (which was nominated in the Best Trance Track category at the 2010 IDMAs), the release once again features the transcendent, transfixing vocals of Australian voxstress Emma Hewitt.

The ascent of Australian born vocalist/songwriter Emma Hewitt began in 2007 when she crashed onto the international dance scene as co-writer and featured vocalist on the Chris Lake U.S Billboard #1 smash hit, Carry Me Away which went on to become a dance floor classic worldwide and proclaimed by Tiesto to be “THE song of the summer” in 2007.

A 2009 collaboration with Dutch man of the moment, Dash Berlin resulted in the single “Waiting” which earned Emma Hewitt another #1 crown, this time on the Global Trance Charts as well as her first International Dance Music Award at the 2010 Winter Music Conference for Best European Track.

With production now complete on a debut solo artist album, fans will soon be introduced to Emma’s versatility on a double sided disc featuring club mixes by some of the world’s most respected Trance, House and Electronic producers as well as darker electronic tinged pop tracks mixed in the U.K by the legendary Alan Moulder (Smashing Pumpkins, Nine Inch Nails, The Killers) and David Bascombe (Depeche Mode, Royksopp, Goldfrapp, Ladyhawke).

The first single “Colours” to be lifted from Emma’s forthcoming artist album (ArmadaMusic/Chryslais Songs) has been remixed by Armin Van Buuren.

In collaboration with: Kristie’s Agency

As of Wednesday January 11, 2012 at all Virgin BO branches

This event is strictly for 18 years old & above.

If you are under-age and bought a ticket: you will be breaking the law, you will be denied entrance and will  be denied any refund