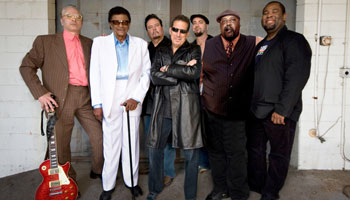 Details: The current special edition of the California All Star Blues Revue was especially put together for Zouk Mikael International Music Festival this July, and features a veritable one-band blues festival of talent. The Mannish Boys are being universally praised as one of the most exciting blues projects to come along in years, featuring some of the most dynamic blues talent in the world today, assembled from the cream of the crop of West Coast Blues veterans like Finis Tasby and Kid Ramos, young bloods like Kirk Fletcher and Sugarray, and many others.

Reviving the spirit of such legendary Revues as the Johnny Otis Show, the Ike Turner Revue, or even the much celebrated American Folk Blues Festival, The Mannish Boys’ big band California Blues Revue carries this grand tradition forward into the 21st century with an assembly of extraordinary talent that represents the very best of both the younger generation and deep-rooted veterans. It is all happening at the Festival’s celebrated annual ’Blues Night’.