Cadenza Showcase With Robert Dietz And Alex Picone At B018 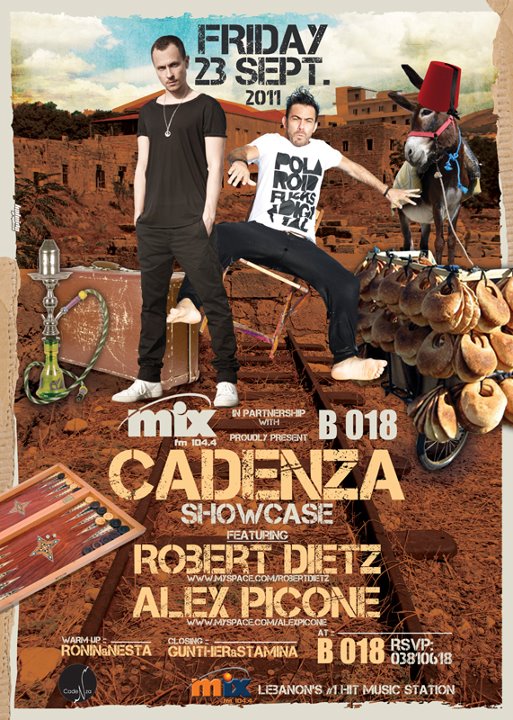 Name: Cadenza Showcase With Robert Dietz And Alex Picone At B018

Our popular club nights series continue and this time, and for the first time in Lebanon, we finally present:

With Robert Dietz and Alex Picone.

Warm up: Ronin and Nesta

There’s a party in Ibiza that’s causing a phenomenal stir – something new and incredibly exciting has grabbed the heart and soul of clubbers worldwide. Word of mouth spread like wild fire and a flood of 5-star reviews made sure that within its first year, this weekly residency broke all boundaries and became the most attended party in Ibiza…

It can only be… Cadenza… At Pacha…

The Sunday night club-land extravaganza, headed up by Luciano and with his crew of merry men – The Vagabundos in support, is making a meteoric impact on the dance scene. A crazy, funky, mad night of music and mixing mayhem, featuring cutting edge ideas, huge personalities and very unique performances, bringing a hypnotic blend of house and techno to the floor, with the sexiest, grooviest beats.

It is entirely fair to say there is nothing else quite like Cadenza.

And on Friday September 23rd Mix FM kicks off with the first edition of our Cadenza showcase… bringing you two of their most celebrated names: Robert Dietz and Alex Picone…

The masters of the decks will be stopping by, to ignite the party in the clubbing capital of the Middle East and show the music lovers just what the fuss is all about…

Dietz is a firm favourite in clubs around the globe and is famous for his hypnotic, sexy, nuanced take on electronic music. Conquering a brand new audience on a recently announced world tour – he’ll be playing Ibiza’s Pacha, Amsterdam’s Dance Valley, London’s Shoreditch Warehouse and his old haunt, Frankfurt’s Cocoon to name but a few.

On Friday September 23rd he sets out to get jaws dropping and heads spinning in Lebanon through a crossover of exhilarating, modern house that encapsulates the celebratory spirit of old fashioned club music, with a sleekness that can only be found in 21st century style and technique…

Alex Picone is a rising star on the techno and house scene and a true genius on the decks… his rise to fame comes with huge support by heavyweights Luciano, Hawtin and Villalobos.

Italian-born Picone creates elegant, fresh, deeply hypnotic grooves, laced with surprises and unconventional elements… helping to make him the legend he is most definitely shaping up to be.

It’s a chance in a lifetime to be part of Cadenza on your home turf. Groundbreaking, fearless, intrepid, awe-inspiring… it’s gonna be a night jam-packed with everything you didn’t expect…

Be part of a new musical revolution and join us for Cadenza Night at B018 – Friday September 23rd.

Mix FM – Our finger’s on the pulse…