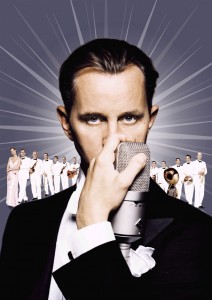 Max Raabe (December 12, 1962 in Lünen) is a German singer and band leader of the Palast Orchester.  He and his orchestra specialize in recreating the sound of German dance and film music of the 1920s and 1930s, especially by performing songs of the Comedian Harmonists.

He founded the Palast Orchester in 1986. His career and that of the Palast Orchester advanced with a Schlager hit entitled “Kein Schwein ruft mich an” (“Why does no one call” aka “No pig calls me”, 1992), a pop song in 1920s’ style, and the film Der bewegte Mann (English title: “Maybe, Maybe Not”) in 1994.

He studied at the Berlin University of the Arts from 1988 to 1995 as a baritone opera singer.

He writes original music, including film music, and also creates covers of well known modern pop songs in a 1920–30s band style, including such songs as Britney Spears’ “Oops!… I Did It Again”, and Tom Jones’ “Sex Bomb”.

Raabe has also made a number of cameo appearances, mostly as stereotypical 1920s and 1930s singers and entertainers, in a number of films by German directors; instances includeWerner Herzog’s Invincible (2001), and Wenzel Storch’s Die Reise ins Glück (2004).