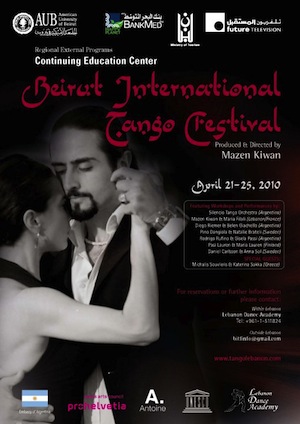 After the success of the first Beirut International Tango Festival (BITF) in 2009, BeiruTango is proud to present the second Festival under the Auspices of the Ministry of Tourism & the Argentinean Embassy in Lebanon and hosted by the Continuing Education Center (CEC) at the American University of Beirut (AUB) during the period April 21-25, 2010.

The first Beirut International Tango Festival hosted 60 dancers and artists, of 15 different nationalities, from around the world. More than a thousand participants attended the daily workshops and concerts. Tango is known to many as one of the most sophisticated dances. It originated in the suburbs of Buenos Aires, Argentina, at the end of the 19th century and has since become one of the most popular dances in the world. From its origins in Argentina to Japan tango is seen today as a global phenomenon bringing people together as it represents a universal language.

Tango is much more than a performance in a Hollywood show; it is music, poetry, culture, socializing and perhaps most importantly it is an expression. The sentence “Tango is not just a dance, it is a way of life!” is often heard and said by old “tangueros” in Buenos Aires. On September 30, 2009, Tango dance and music was declared part of the world’s cultural heritage by the United Nations and granted the international seal of approval. The 24 members of the United Nations Educational, Scientific and Cultural Organization’s (UNESCO) Intergovernmental Committee of Intangible Heritage granted the tango dance and its music protected cultural status at its meeting in Abu Dhabi.