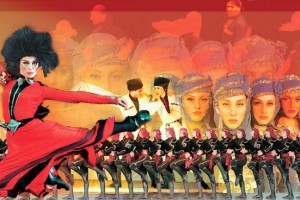 Throughout its history the Georgian National Ballet has appeared at the Albert Hall, The Coliseum, The Metropolitan Opera and Madison Square Garden, among others. In 1967, La Scala welcomed them – reportedly the first and the only time a folklore group was given a chance to perform on its stage.

The Georgian National Ballet has seventy dancers and a small orchestra.

A performance by the Georgian National Ballet’s dancers in which the female dancers, wearing long skirts, appeared to glide across the floor was an inspiration for writer Terry Nation in creating the Daleks for the television series Doctor Who.