B018 Beirut And Fuel Nights Dj Ziad Ghosn At Sanctuary 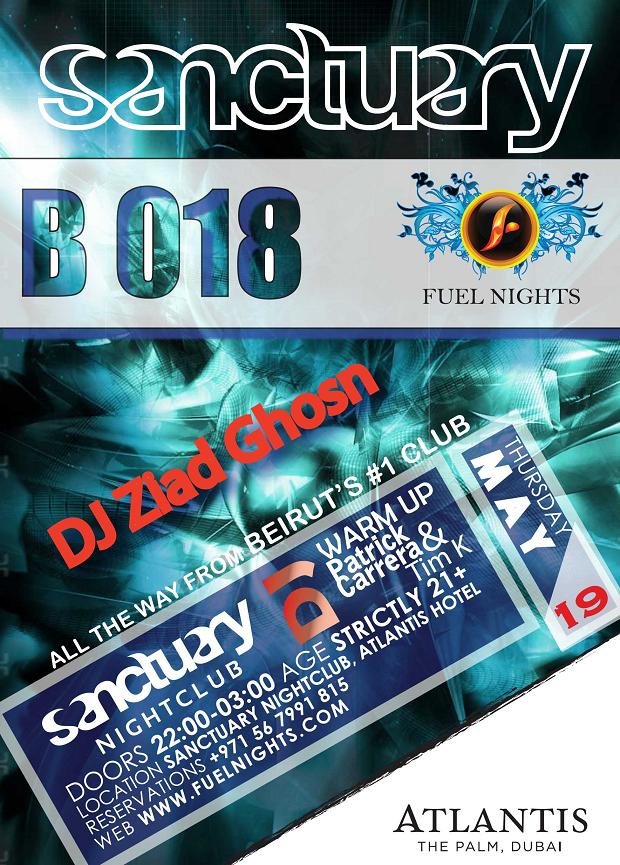 AFTER THE HUGE BO18 EVENT WITH GUNTHER & STAMINA

with Warm Up DJ : Patrik Carrera

B018, a new wave of “musicotherapy” for the youth who lived in war torn Beirut, a dream created by the born musician Naji Gebran.

His music career began at an early age, he started listening to rock music, then started to get more and more involved in the electronic music scene when he turned his attention to underground music, progressive and psychedelic rock such as Depeche Mode, Porcupine Tree, and mostly Pink Floyd.

In the year 1998 he turned his full attention to electronic music, mainly everything that sounds progressive, such as Sasha, John Digweed, and Dany Tenaglia…

His first steps in his music career were as a DJ in private parties and small gigs where he evolved and discovered himself more and more in the deep progressive house music. He was invited as a guest DJ in many pubs and clubs around the country.

In the year 2004, he met with Fady Ferraye, he was influenced by his work and taste of music. During this period, he mastered all the tips and tricks of djing especially when he was invited by Fady in the year 2005 to warm up and play at B018 every other weekend.

In the year 2006 Ziad became a resident Dj at B018 spinning the latest in House, Deep House, Techno, Tech house and progressive house.

EVENT NAME: B018 Beirut in Dubai

the most prestigious clubs in Abu Dhabi and Dubai. Fuel Nights

This event is organised by Fuel Nights in association with B018 and is brought to you by Dubai Desert Gate, Ahlan Magazine, and BeirutNightlife.com