Alex Moreno at I bar Downtown 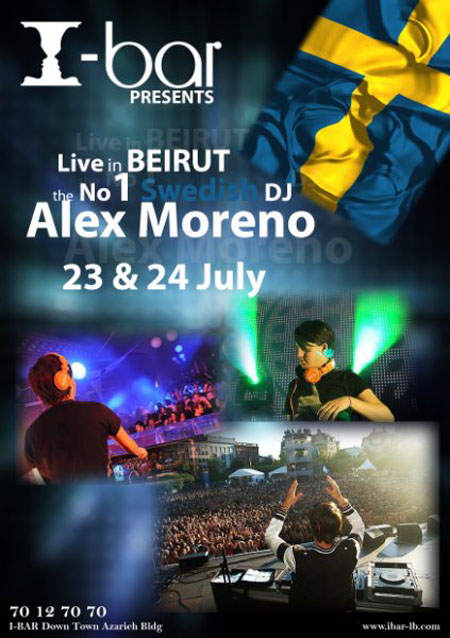 I BAR MANAGEMENT PROUDLY PRESENTS FOR THE SECOND TIME : “THE SWEDISH NUMBER ONE DJ ALEX MOREMO” on July 23rd and July 24th at I Bar Downtown…

Alex Moreno is one of the Sweden’s largest and significantly fastest growing DJ names. No other Swedish DJ has been able to attract the level of fame which Moreno has received without producing and selling tracks. Alex has with his tremendous skill and flexibility been able to form a successful career with potential to grow significantly within the months to come.

Alex has been playing all around the globe – played with some of the largest name within the DJ business, and has even reached a peak audience of 40.000. Moreno has appeared in most of the major newspapers and TV-channels as MTV and has also mixed for the enormous radio channel NRJ.

As early as at the age of 21, he became nominated for ‘DJ of the Year’ in Sweden and has won numerous awards. Recently he has won the “Café Opera DJ Challenge 2009” and “Most technical DJ 2009”-prizes. Alex has at numerous of events played for the world’s leading club concept, Ministry of Sound. His references simply do not seem to have an end.

Growing up in Stockholm, Alex’s interest for the DJ culture and the electronic music started evolving. Alex began to collect vinyl records with the music which he held most dear. By collecting money and working outside of school-hours he was able to finance his first DJing equipment. His curiosity led to him experimenting and was the beginning of a new era for Moreno.

Being a bed-room DJ for a while, he started receiving requests from his friends to attend and play on their smaller ventures. Carefully, yet intriguingly he started to take on the role of being a real DJ, and finally he received a chance to play on a smaller night club venture in Stockholm. His performance was more than satisfactory and this would be the real kick-off for his DJ career.

Ever since, gigs has descended upon Alex and he has been playing with highly anticipated DJs such as: Tiesto, Ferry Corsten, Axwell, Eric Prydz, Deadmau5, Judge Jules, Sebastian Ingrosso, Steve Angello, Bob Sinclar, Fedde le Grand, Roger Sanchez and so on. He receives requests on a regular basis to attend and play at events outside of Sweden, he’s been playing at Dreamers in Spain, Loving Life in England and at other ventures in countries such as Germany, Lebanon, Norway, Denmark….

Today, Alex Moreno lives on his career and between gigs, he spends a lot of time in the studio to kick off his production career, late summer 2009 he released his first track, ‘Underground Disco’ which received great feedback and was an anticipated release. Alex Moreno has a strong fan base which keeps supporting him by attending his gigs, and the path on which he is on is yet to be unwritten. One thing is sure, Moreno being a young and ambitious DJ/Producer has an extremely bright future.