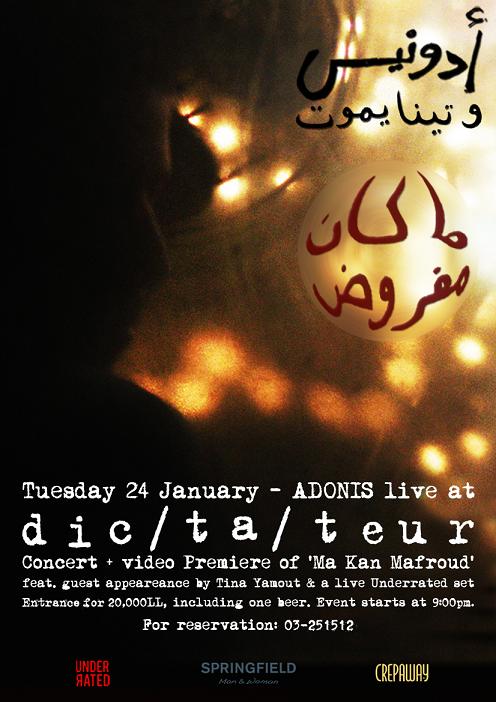 Details: About a year ago was our first concert ever at Walimat Wardé. We had an affinity for using empty wine bottles as percussion, a fetish for vintage keyboard sounds, and found absolute joy in making your hips shake when you least expected it….

Since then, we have released a disc, shot a video clip, participated in major concerts and festivals around Lebanon, tweaked our line-up to include the gorgeous Vladimir Kurumilian, and, most importantly, met amazing artists and musicians, who have enormously helped us shape our sound and find our place in the beautiful soundscape of this city.

One of those artists is Tina Yamout, a brilliant singer/songwriter with a drop-dead voice and a smile of velvet silk. We had the honor to collaborate with Tina on ‘Ma Kan Mafroud’, a track that was featured on our first CD, and for which we recently shot a video clip under the direction (yet again:) of the super-talented Robert Cremona. And well, we’re basically so excited to share it with everyone that we want to see the reactions on your faces when we play it for the first time 🙂

So save the date! Tuesday January 24. ‘Dictateur’ will turn into a concert venue where we will perform our new songs, play some old favorites, and premiere the video, in the presence of the cast and crew.

Tina will make a guest appearance during the concert, after which the notorious Underrated Crew will take over the decks for a set to make you feel less like it’s on a weekday.

Entrance is 20,000LL ; includes one beer. Tickets are on sale at Dictateur, or available at the door. If you want to reserve a table, you can call Dictateur on 03-251512.

Come and get friends, it would be cool to see everyone and make new friends.