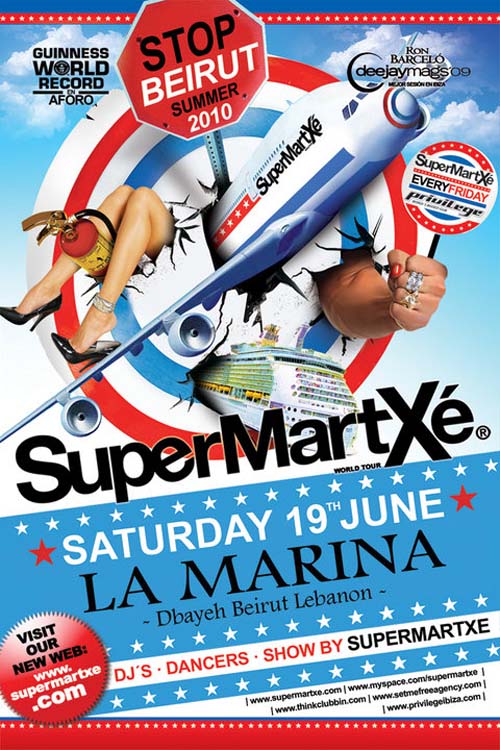 We proudly present you our most fashionable clubbing session in entire world – SUPERMARTXE!!!!

In just three years, many of top celebrities, along with our regular clubbers, have crosses our dance floor spreading their glamour.
Our secret: music and spectacular shows!

‘It’s kind of fun do to the impossible’ – our summer slogan, is also our work motto.

Supermartxe had its beginings in Madrid, Spain. Our first challenge was in Ibiza in summer 2007, whose succes was our stepping stone to the hole world and opened up the doors for us to present ourselves in summer 2008’s most sought-after scene: Ibiza Privilege, were we had obtain the WORLD GUINNES RECORD FOR AUDIENCE and we continued with the same succes in the summer 2009 in the same club!

After this success big succes, that no concept had obtained so quicly, we decided to take our event on tour world wide with events in cities like Paris, Brussels, London,Miami, Rome, Greece, Moscow, Barcelona, Ibiza… now we arrive to one of the best crowd of clubbers in the world: BEIRUT LEBANON!!!!!!!

Join us for a night that you will never forget along with our music, djs, dancers and special shows form the hand of the best party worldwide SuperMartXe!!!!!!!

This event will take place on 19th of June 2010 at LA MARINA DBAYEH BEIRUT LEBANON!!!!!

Will you miss the event of the year in Beirut