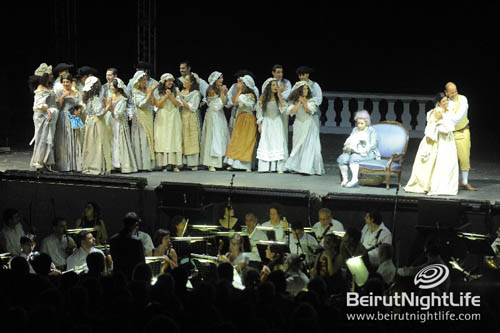 A wonderful example of Lebanese and Italian collaboration, this evening included a young and talented cast of Opera singers from both countries and presented in collaboration with the Italian Cultural Institute and the Antonine University.

Mozart’s timeless masterpiece becomes a wonderful example of Lebanese and Italian collaboration with the Italian Cultural Institute and the Antonine University Choir. Directed by Luca Valentino and conducted by Francesco Cilluffo, this full opera production features Samar Salamé as Suzanna, Toufic Maatouk as Figaro, Raymond Ghattas as The Count, and Caroline Solage as The Countess.

This production stars Samar Salamé and Toufic Maatouk as the servant couple who outmaneuver their bosses (and everyone else in their world) over the course of one crazy day. Raymond Ghattas is the philandering Count, and Caroline Solage plays the role of his long-suffering wife.