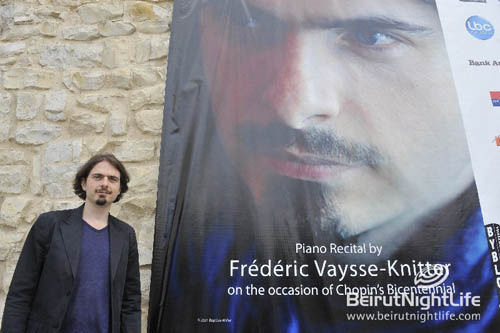 French pianist of Polish origin, Frédéric Vaysse-Knitter who at age 17 has obtained a first prize in piano and chamber music, was Laureate of several festivals. This time he took part in the renowned Byblos International Festival 2010 at St Georges church-Ghalboun with a special dedication to Chopin’s bicentennial, Frédéric Vaysse-Knitter had a substantial number of recitals to the Polish-French composer; e.g. at Sorbonne university in March, in Cracow (Poland).

Frédéric has frequently performed in Spain, France, Germany, Poland, Switzerland, Belgium, Latin America and Canada, and in such prestigious venues as the Herkulessaal Munich, the Paris Opéra , the Théâtre des Champs-Elysées, the Opéra d’Avignon, at the Festival Radio-France Montpellier, and the Palais des Festivals in Cannes. He also took part in various musical programmes on radio and television with France Musique, Bayerischer Rundfunk, Radio Suisse classique, TV Polonia, and BBC.

As a soloist, he has appeared with the orchestra of the Opéra d’Avignon-Provence, the Toulouse chamber orchestra, the Opéra de Paris and the Cologne orchestra, under such eminent conductors as Sir Eliot Gardiner, and Michael Schmidtsdorff.

Newer Post Tawlet: A True Taste of Lebanon
Older PostBekaa Valley: ‘The Place for the Gods’