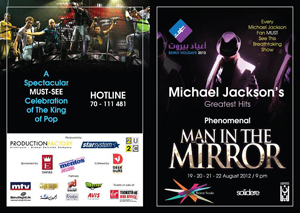 Man In The Mirror The Michael Jackson Show at Beirut Souks August 19th-22nd: This amazing show celebrates the music of the King of Pop, Michael Jackson, in a high octane theatrical spectacular that spans over three decades of the greatest hits in pop history. With an international cast of world-class performers MAN IN THE MIRROR features the incredible music of Michael Jackson with jaw-dropping special effects, eye popping multimedia displays, breathtaking vocals and explosive choreography. Featuring all of Michael’s number one hits, this spellbinding musical show takes the audience on a musical journey through the career of one of the greatest entertainers of all time. The show’s creative team has been working alongside musicians and dancers who were involved with “This is it” – the tour Michael Jackson never performed.  The American press describes this show as “A glorious tribute to the King of Pop”. Tel: 70-111 481 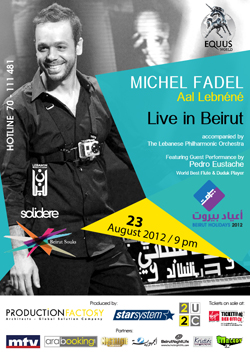 Michel Fadel at Beirut Souks August 23rd: Michel Fadel Aal Lebnene, accompanied by the Lebanese Philharmonic Orchestra, featuring guest performance by Pedro Eustache world best Fluto and duduk player at Beirut Souks…need we say more? This event is a must see for all true music fans of Lebanon. Come out and enjoy a night of raw musical talent. Tel: 70-111 481 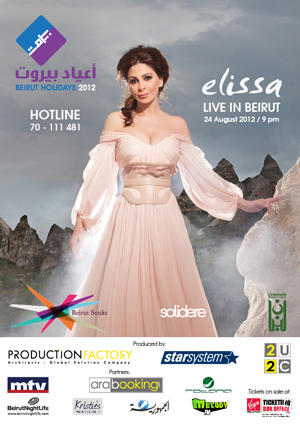 Elissa at Beirut Souks August 24th: Elissa is a name recognized all over Lebanon, its surrounding countries and even across the globe. She is known for her powerful yet lovely singing voice as well as her collaborations with well-known Arab superstars. Elissa’s 8th studio album “As3ad Wahda” is here and it is time to celebrate with her. She will be performing and incredible live show at the Beirut Souks for her fans. Tel: 70-111 481 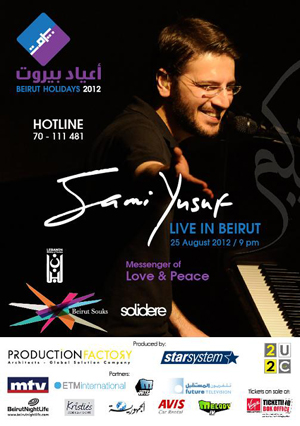 Sami Yusuf at Beirut Souks August 25th: Sami Yusuf is a British singer-songwriter, composer, producer & an accomplished musician. Having studied music at the Royal Academy of Music in London, he became the talk of the town in lands as far and diverse as Egypt and Turkey. His groundbreaking debut album, Al-Muallim sold over 3 million copies and earned him a massive following in the Middle East, North African nations and South-East Asia. Hailed by Time magazine as Islam’s biggest Rock Star and The most famous British Muslim in the World by The Guardian, it was only a matter of time before sheer dynamism of what the media dubbed a popular act became the subject matter of think-tank studies. His performances are trim and tightly focused, complete with singing in English, Arabic, Turkish, Persian, Urdu, Azeri and Malay and performance on a multitude of both classical and ethnic instruments. He has recently launched a campaign in partnership with United Nations World Food Program to help end hunger in the Horn of Africa hit by drought. His Live concert in Wembley Arena Darfur – an effort recognized and praised by the British government. Sami also works in close tandem with the UN sponsored charity, Save the Children. Manifested both musically and philosophically in his third album. Wherever You Are, Spiritique is a product of Sami’s identity. Tel: 70-111 481