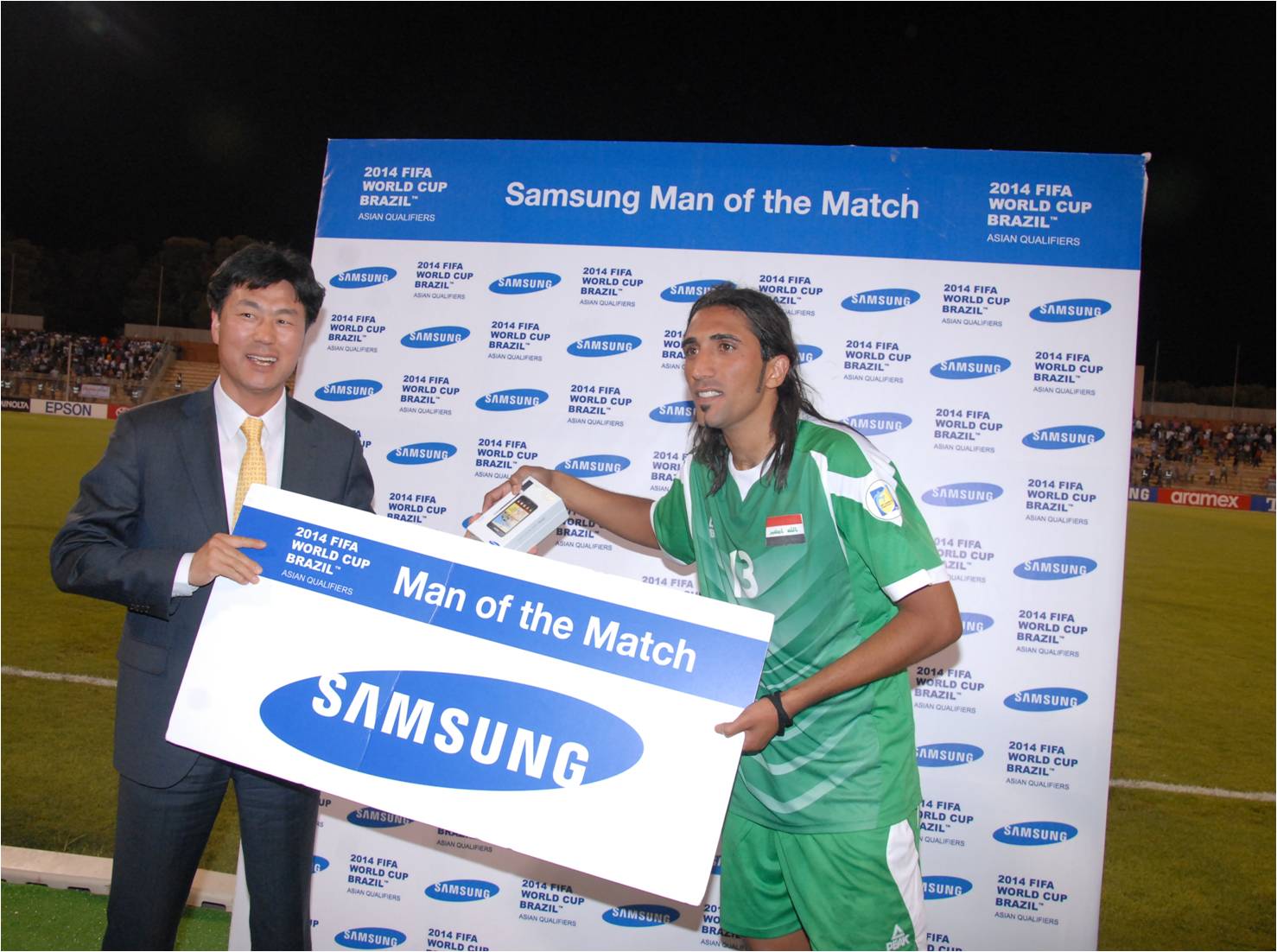 Samsung Electronics Co., Ltd, announced that it has kicked off marketing campaigns to engage with Asian football fans during the FIFA World Cup 2014 Asian Qualifiers Final round. The final round of FIFA World Cup 2014 Asian Qualifiers, which started from June 3, is the first competition that Samsung is sponsoring out of its extended partnership with the Asian Football Confederation (AFC), the governing body of Asian football.

Mr. Sang Suk Roh, President of Samsung Electronics Levant Awarded “Man of the Match” title to the Iraqi National team player Karar Jassim, in the first FIFA World Cup 2014 Asian Qualifiers Final, which brought together Jordan and Iraq, and ended with equal score of 1-1. The Iraqi player Karar Jassim received Samsung GALAXY Note in recognition for his outstanding efforts in the game.

Samsung decided to extend its partnership with the Asian Football Confederation (AFC) for a further four years, starting from June 2012 to the end of 2016, and this will mark twelve continuous years that Samsung has been engaged with Asian football. Samsung first began working with the AFC back in 2005, and is the Official Partner in mobile device and semi-conductors sector.

As a company passionate about football, Samsung uses the powerful medium of football to reach consumers across the world. During the first phase of the Asian Qualifiers, Samsung will run marketing campaigns locally in Japan, Jordan and Lebanon, focusing on the home game.  Galaxy Note Studio opened at the Saitama Stadium 2002 in Japan, enabling fans to experience and enjoy the product and brand through the football match. In Jordan and Lebanon, Samsung mobile products were featured in Print and TV commercial, and also at the product experience booth at the stadium. In-stadium branding and giveaway distribution will continue to be part of the campaign in each market.

“Samsung is also happy announce our extension of the partnership with the AFC for another four years which will allow our continued commitment to Asian football. Samsung and the AFC began this partnership with the mutual vision of taking football in Asia to greater heights and I believe we have achieved this,” said Mr. Hwang.

Mr. Zhang Jilong, AFC’s Acting President said, “We are delighted our friends at Samsung have decided, once again, to renew their relationship with the AFC which will enable football in our continent to continue to flourish. Starting with this World Cup 2014 Asian Qualifiers Final, we hope Samsung to continue to contribute to enriching passion for Asian football fans.”

Samsung is also involved in football sponsorships in Africa and Latin America, to support the football development in each continent and also engage with the local football fans. Samsung also communicates with global football fans through its partnership with the Chelsea FC, the prestigious English Premier League Club.