The controversial Lebanese model again had another Facebook rage after she got offered a secondary role in a movie. The “Queen of Klinkistan” as she likes to call herself wrote on her Facebook page that the “Queen Klinkistan” does not take secondary roles, she plays lead roles or nothing at all. She added “get out of my face am not one of those that throw themselves on movie roles, I am always in the lead and never the second”. This is not her first outburst, and she is known to use inappropriate language in her tweets and Facebook posts. 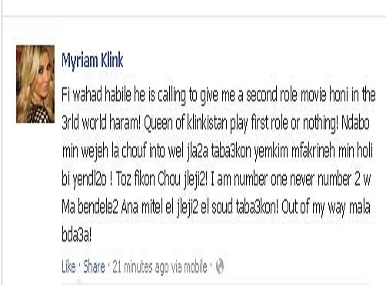