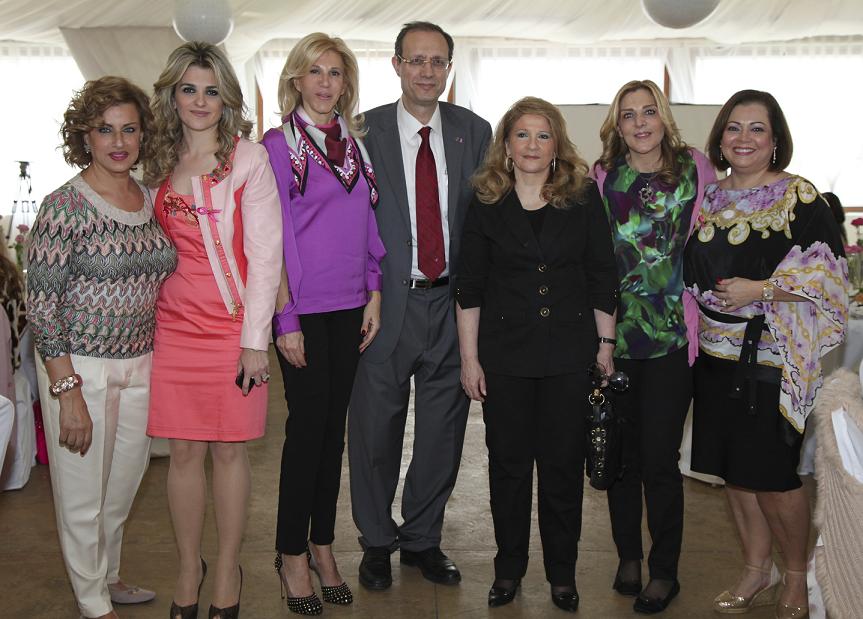 Under the patronage and presence of HE Minister Leila El-Solh Hamade, The Lebanese Breast Cancer Foundation celebrated mother’s day for the second year in a row during a brunch held at Movenpick Hotel in Beirut. The event was held in collaboration with the Breast of Excellence of Naef Basile Cancer Institute at the American University of Beirut Medical Center (AUBMC) and was attended by socialites and supporters of the association and members of the press. The “I wear Pink for My Mother” event, aims at celebrating women’s health every year on Mother’s day, by raising awareness on the means to prevent breast cancer, detect it at an early stage, and cure patients.

Professor Nagi El Saghir welcomed women and their daughters and preferred to call “Mothers’ Day” as “Mothers’ Health Day”. Prof Saghir said that there are about 1700 new breast cancer cases each year among Lebanese women. He said with awareness campaigns the number of advanced cases has decreased and doctors are now curing more than 90% of early stage cases. Women should no longer be afraid of cancer but they should not “sleep on it and let it grow in their body” but go tell their doctor about any changes they notice in their breasts. “Early detection saves lives and saves breasts”. Prof Saghir told mothers on their day that “Lebanon would even be better if the women and mothers took charge of its government”.

HE Mrs Solh-Hamade commended the efforts of the Lebanese Breast Cancer Foundation and its president Dr. Nagi Saghir to promote health awareness on Mothers’ Day and improvement of early detection and prevention. She said that from her personal experience with her late husband, she knows all the difficulties patients go through and how much medical and psychological support they need to overcome the disease. She appreciates and highly supports their efforts to help patients physically and psychologically.

The event was attended by Mrs Ruba Bilal Hamad, Mrs. Manal Hassan el-Solh, Mrs. Anne Franjieh President of Association Faire Face, Mrs. Rima Dandashi, President of May Jallad Foundation, a large numbers of mothers and their daughters, and many mothers breast cancer survivors. Members of the foundation distributed on the attendance the foundation’s book: “Knowledge is the Path to Recovery”. During the brunch, raffle tickets were sold as part of a fundraising to support breast cancer patients at the American University of Beirut Medical Center.